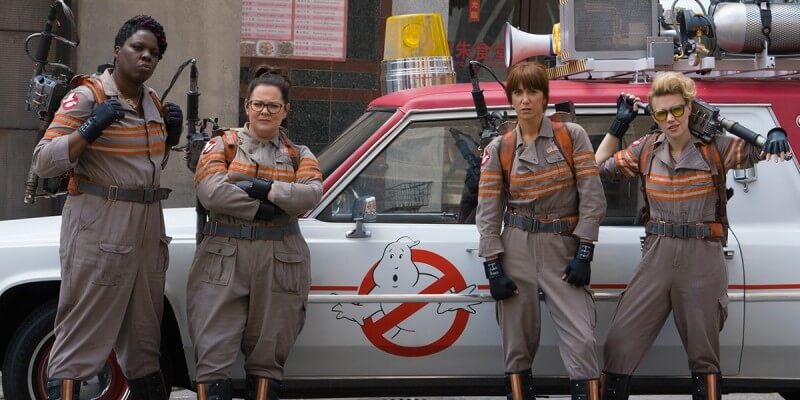 That repeated distinction is important because, for better or worse, the movie made an impression on me. From that point on, Ghostbusters, as a franchise, was an incredibly influential part of my childhood. I watched the Saturday-morning cartoon adaptation religiously, I collected all of the toys, and I was wholeheartedly on board for the sequel when it came out in 1989—it took me until adulthood to realize “Ghostbusters 2” isn’t very good.

But that first movie… I’ve probably seen it more times than any other movie ever made. Suffice it to say that “Ghostbusters” is important to me.

And now, after twenty-seven years (holy moley) have passed since the last Ghostbusters movie, there’s a new one coming out. Reportedly a straight-up reboot, this year’s “Ghostbusters” comes complete with a new cast, modified equipment, and a story that apparently bypasses the events of everything that has come before.

Last night webseries creator James Rolfe (AKA The Angry Video Game Nerd) posted a video declaring that he intends to boycott the new movie, and refrain from reviewing it on his website Cinemassacre. James is one of the few high-profile geek-culture internet personalities I genuinely respect and admire, so I trust that the reasoning behind his decision was made with the best intentions in mind—loyalty to the original characters, story, and creative team being the obvious priority.

When that video went live I immediately knew it would inspire a vitriolic reaction. Predictably, by this morning the online community had erupted in anger, and the backlash has already reached critical mass, to the point where it may very well eclipse the reach of the average Cinemassacre output. Mr. Rolfe may have put himself in danger of becoming known primarily as “the guy who represents the misogynistc opposition” among vocal supporters of this movie’s already heavily-politicized release.

Here are the points where I agree with James: personally, as a rule, I don’t tend to have much interest in remakes of movies that I fondly remember from my childhood. I didn’t see “Robocop (2014)” or “Total Recall (2012)” or “Fright Night (2011.)” I don’t care that they were made, and upon their releases I just kind of shrugged my shoulders and did my best to ignore them. Then again, I don’t have an emotional attachment to any of those franchises the way I do to Ghostbusters.

I also understand that big studios see dollar signs when they look at long-dormant IPs, especially when so much financial success has met recent similar 1980s reboots like “Transformers” and “Teenage Mutant Ninja Turtles.” The level of success in terms of quality of those reboots is up for debate, of course.

My point is that I’ve never been under any delusion that “Ghostbusters” is sacred text, never to be exhumed and repurposed again. Ghostbusters, as a brand, was never going to stay dormant forever. But if I had my choice, if I had any kind of say in the matter (which I don’t,) much like James I would have preferred a continuation of the existing story. And like James, I think that notion probably should have died when Harold Ramis did.

On the other hand, everyone on board creatively for this new movie has proven their talent. Director / co-writer Paul Feig is the creator of “Freaks and Geeks,” one of my favorite television shows of all time. They made smart choices in the casting; the Ghostbusters themselves are all played by established comedians: Kristen Wiig and Melissa McCarthy have both been funny in the past, and Leslie Jones and Kate McKinnon are frequent highlights of the current “Saturday Night Live” cast. Let me get this out of the way: I don’t care what gender the Ghostbusters are. I know a lot of people do, but it truly doesn’t matter to me. Yes, “Ghostbusters” was considered a boys’ movie when I was growing up, and most of the really big Ghostbusters fans I’ve known over the years have been male, but I see no reason why the gender swap can’t make the opposite true for the current generation. Moreover, I think we’ve gotten to a place socially where we should be able to immerse ourselves in a blockbuster’s story without necessarily identifying as the same gender (or race, for that matter) of its protagonists.  “Star Wars: The Force Awakens” should be the final, be-all end-all proof of that theory.

Of course, there are plenty of people (read: angry dudes) for whom the very idea of a Ghostbusters team made up of women is repugnant, or representative of some kind of aggressive PC social-justice takeover of a beloved property. I don’t see that as being the case. I honestly believe that this reboot is a product of two things: a giant conglomerate studio wanting to cash in on a proven franchise that has gone untapped for a long while, and a group of capable creatives who stepped in to make that happen. I don’t see a political agenda here, other than the ones that audiences and internet culture-war combatants have imposed upon it.

But I don’t think James Rolfe has an agenda either, other than protectiveness over something he loves. Though unlike James, I will almost certainly wind up seeing “Ghostbusters” this year, because I like the people involved and I’m curious to see what they came up with. I’ve chosen not to pre-judge the movie based on a poorly-cut-together trailer. I know, from plenty of experience, that trailers can be misleading.

Here’s the bottom line, for me, and what’s making me the most upset about this entire kerfuffle: I don’t want people to be angry about Ghostbusters. I don’t want Ghostbusters to be a point of contention, or a political flag to be moved up or down a field by opposing sides.

I want to go see a Ghostbusters movie, have a good time, get scared, laugh a bunch, and then I want to want to watch it again. If the new movie can deliver on those terms, I would like to think I’ll be able to consider it a triumph without besmirching the legacy of the original or the passion of its devotees. But on the flip side, if the movie doesn’t accomplish those essential goals, frankly, I’d like to be able to call it a failure without being labeled a sexist.

In the bigger picture, of course I want the world to continue to change for the better. I want to achieve true social equality for the Greater Good, and for another, far more selfish reason: so that debates like this don’t come down to men versus women, or feminists versus MRAs, or whatever. I want the debate over pop culture to come down to good idea versus bad idea, artfulness versus crass commercialism. And while I would absolutely love it if the new “Ghostbusters” turns out to be a good idea… even more than that, I want to be able to judge it on its own merits. When the time comes, I’m going to try my best to do just that.