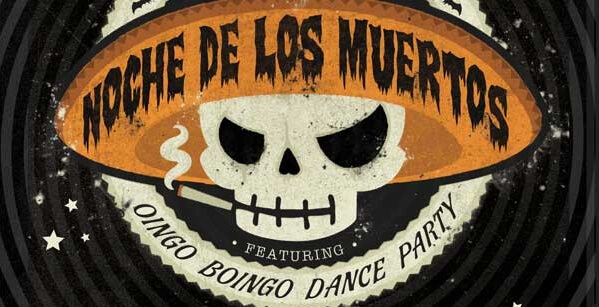 Happy Friday the 13th! What better day to bring you some celebratory and spooky news from the world of horror enthusiasts?

As we previously announced on these pages, Midsummer Scream is shaping up to be the go-to Halloween-themed scare convention in Southern California this summer.

Now the organizers of the event have announced a reason to be even more excited: Oingo Boingo Dance Party, the fantastic band made up of former members of Oingo Boingo (including Johnny Vatos, Steve Bartek, John Avila, Sam “Sluggo” Phipps, Carl Graves and Doug Lacy) will be headlining the festival during the 21+ “Noche de los Muertos” after-hours party on Saturday night!

Oingo Boingo is best known for macabre but up-tempo songs like “Dead Man’s Party,” “No One Lives Forever,” and “Weird Science.” The band became famous in the early 1980s with frontman and songwriter Danny Elfman, who went on to become one of the most prolific and renowned film composers of the late 20th century. Elfman left the band in 1995 but the legacy continues.

“Oingo Boingo was synonymous with Halloween here in Southern California in the ‘80s and ‘90s,” said Rick West, Creative Director of Midsummer Scream. “What better way to launch our event than a concert featuring these legendary performers doing what they do best as Oingo Boingo Dance Party? To me, bringing these musicians and the haunt and horror community together under one roof is a no-brainer. They’re going to bring the house down!” Since we last posted about Midsummer Scream, the festival has also announced additional participants in their event, ranging from local haunts to the most popular and highly-attended Halloween haunts and theme parks:

Midsummer Scream is being put together by the fine folks at Creepy LA and Theme Park Adventure, and will take place July 30th-31st at the Long Beach Convention Center.

As a special Friday the 13th promotion, you can visit Midsummer Scream’s ticketing page for HALF-OFF tickets to the event through TODAY ONLY. Comments Off on Oingo Boingo Dance Party announced as headliners for Midsummer Scream haunt festival; get half-off tickets today only!