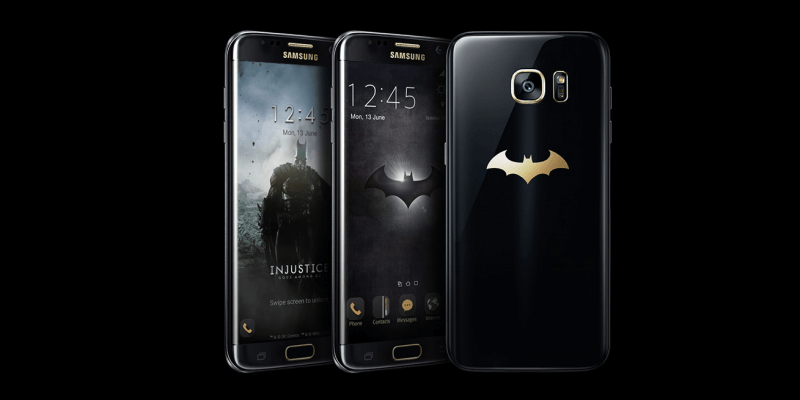 Featuring a sleek black glossy finish and eternally cool Batman logo emblazoned on it, Samsung has revealed its Batman-themed smartphone coming out in June.

Working together with Warner Bros. Interactive Entertainment and DC Entertainment, the Samsung Galaxy S7 edge Injustice Edition may be a mouthful but it sure would look great with that full-size Batmobile replica you’ve been having your eye on since you were, oh, eight years old.

Check out the phone in all of its glory below:

According to SuperHeroHype.com, the phone is being released to mark the third anniversary of the popular mobile game, Injustice: Gods Among Us.

The Galaxy S7 edge Injustice Edition package is equipped with a sleek deep black Galaxy S7 edge, accentuated by gold detailing and an iconic seal on the back, inspired by Batman. The package additionally offers a Gear VR (in select territories), along with Injustice game credit and Oculus VR content vouchers.

“We are excited to partner with Warner Bros. Interactive Entertainment and offer a special edition of Galaxy S7 edge for fans of Injustice: Gods Among Us,” said Younghee Lee, Executive Vice President of Global Marketing, IT & Mobile Division at Samsung Electronics. “Samsung always seeks to provide the best mobile gaming experience for its users, and this partnership reinforces our commitment to the game’s fans.” For more info, and to lust over the images just a little more, visit Samsung’s official site. You can also click here to download the new Injustice: Gods Among Us mobile game.