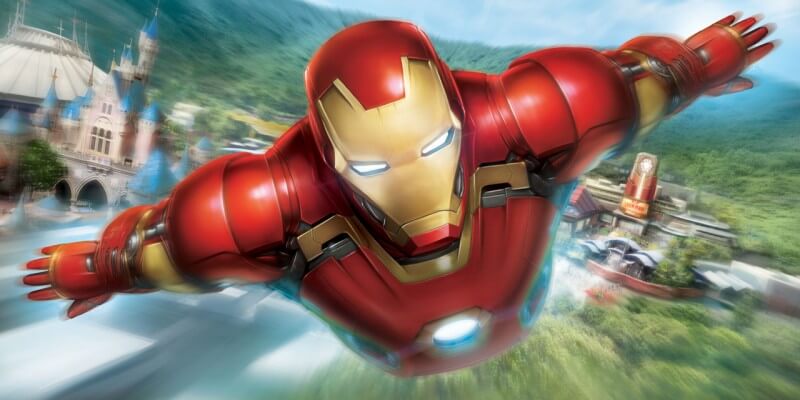 Ever since Disney acquired the rights to Marvel back in 2009, fans of Marvel superheroes have been eagerly awaiting the first official Disney/Marvel “E-ticket” attraction in one of its theme parks. Rumors aside, the only one officially announced so far is the Iron Man Experience at Hong Kong Disneyland.

Today, the Disney Parks Blog announced that the ride has finally entered the testing phase:

Iron Man Experience is the all-new attraction we’ve been eagerly waiting for since it was first announced in 2013. Hong Kong Disneyland announced today that ride system tests by their expert team of Walt Disney Imagineers are a go as construction nears completion. Once it opens, it will officially be the first Marvel ride-through attraction at a Disney Park. The new ride will be opening in Stark Expo in Tomorrowland.

At the D23 Expo in Anaheim last August, the Disney Parks division made a 10-minute presentation on the Iron Man Experience, including a 45-second clip of footage from the new ride, and an on-stage cameo appearance by Stan “The Man” Lee himself.

More info on the ride from the Disney Parks Blog:

The story begins when Tony Stark (aka Iron Man) decides to bring the Stark Expo to the park. Guests can visit the Expo and explore the latest and greatest innovations from Stark Industries. They’ll go aboard an Iron Wing vehicle, the latest flying transport invented by Stark Industries, and journey through Hong Kong streets and the iconic city harbor as they battle against the evil forces of Hydra alongside Iron Man.

Apparently the Stark Expo area will also include a “Become Iron Man” interactive area similar to the one previously hosted at Super Hero HQ in Disneyland, with exclusive merchandise and of course a meet-and-greet with Iron Man himself.