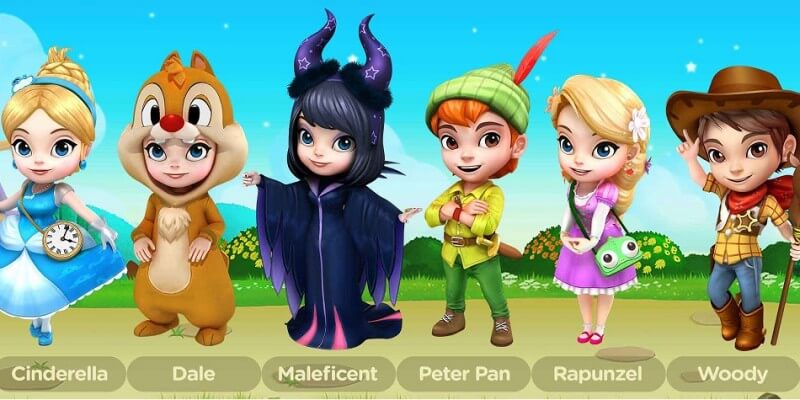 A new exciting mobile game has arrived from Disney Interactive. This time Disney is combining their great Disney characters with the board game setup to create an addicting mobile game. Disney Magical Dice, the latest game from Netmarble invites gamers to play as their favorite characters as they travel through the virtual board game, encountering different maps and Disney-themed cards, avatars, dice, and landmarks. Players will roll the dice to acquire squares and take charge of the game in various different ways. Acquiring other players’ squares will be an effective attack, while building landmarks will be the ideal defense mechanism.

Celebrating the launch of the game, players will receive 3 premium card packs between April 28 and May 27 when connecting individual Facebook accounts to the game, and 10 diamonds every day when at least one game is played per day between April 29 and May 3. Up to 200 diamonds will be also awarded to players when friends are invited into the game. Diamonds can be used to purchase various items within the item shop, including premium costume cards which transforms avatars into Disney characters. Inviting friends is easy, as players can invite friends through the Bluetooth network or through their Facebook accounts and play games together in real-time. Strengthening the social feature along with an ‘easy to approach’ and ‘fun to play’ in-game tutorial allows players of all skill levels to easily enjoy the game.

By implementing classic Disney characters, storylines, and imagery, Disney Magical Dice is sure to appeal to players of all ages, all across the globe. Additionally, the game features an easy dice control system that sets up players with fun challenges as travel through the board game. Complete with exciting PvE and PvP game modes, this Disney Magical Dice will be the new fan favorite. *Your Favorite Disney and Pixar Characters: Players can play as their favorite Disney and Pixar characters, including: Goofy, Daisy Duck, Dale, Chip, Donald Duck, Rapunzel, Maleficent, Minnie Mouse, Mickey Mouse, Snow White, Cinderella, Stitch, Aladdin, Alice, Woody, Buzz, Tinker Bell, Peter Pan, and Captain Hook.
*Fun Disney themed maps and landmarks: Mickey & Friends allows players to play the game with the popular and familiar original Disney characters including landmarks of Mickey, Minnie, Goofy, Chip & Dale, and Donald Duck. Fantasyland includes various objects from Disney’s stories including the magic mirror, glass slipper, and pumpkin carriage as landmarks and more!
*PvE Game Mode: Players can participate via the PvE stage-based practice mode that mixes a simple storyline with Disney characters. A tutorial introduces game rules, allowing players to adapt to the gameplay in an easy and engaging manner. Fans can play against various Disney characters in the different stages and earn their costume cards as rewards.
*Ready, Set, Play: In the PvP game mode players are matched up in real-time competition. Various modes include Free-For-All and Team Mode (2v2), and feature three different classes (Rookie, Minor, Major) for players to choose from depending on their experience with the game.
*Card Collection & Card Power-Up: Disney Magical Dice invites you to expand your collection of Disney character costume cards while naturally learning about how to strengthen your cards through Power-Up and Fusion.
*Player Strategy: Quality dice and card stats are influential in helping players win Disney Magical Dice. There are different stats for each dice and some dice stats are added to your card stats. Extra help comes in the form of magic beans. Players can collect magic bean through various in-game rewards and expert league victories.
*Competition via Rankings: Trigger the competitive nature of players through international and friend leaderboards. Various rewards are awarded in short intervals for the different ranks that players achieve.

Download now for free on the Google Play Store of the Apple App Store.

So what do you think? Are you going to be downloading Disney Magical Dice?