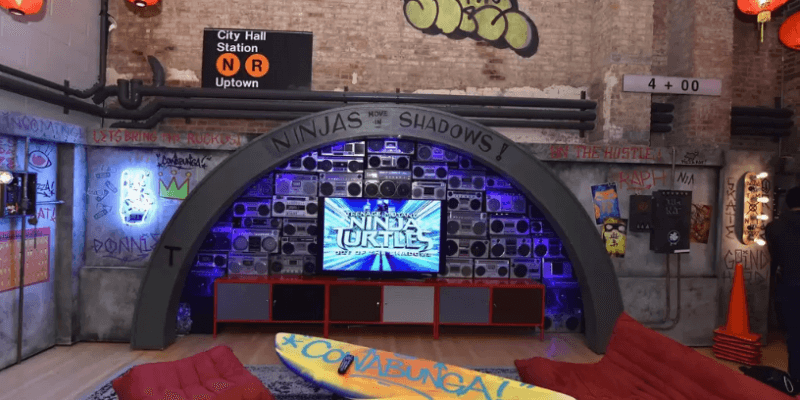 If you’re itching to grab some pizza and hang out with your bros in New York, Airbnb might have found just the right place for you.

Yes, it’s true. Airbnb is giving a few lucky fans a special, limited time opportunity to stay at the Turtle Lair in Tribeca. Posted by host Leonardo, who was only asking $10 a night, this incredible pad is where the Teenage Mutant Ninja Turtles hang when they’re not cracking skulls on the mean streets of N.Y.

Packed with amazing details, props, a glow-in-the-dark basketball court (because why not) and even a retro Ninja Turtles arcade machine, it’s a dream come true for any fan to be able to spend the night there. Though the heroes in a half shell seem to be out and about — perhaps busy promoting their new movie Teenage Mutant Ninja Turtles: Out of the Shadows — bookings for the Turtle Lair were snapped up instantly. But don’t worry, you can still enter a contest to have the chance to spend the final night there.

Just check out the photos of this swinging pad, which can accommodate up to six people with three bedrooms, six beds and four bathrooms — which comes in handy when nature calls simultaneously for all of the Ninja Turtles. Here is the info listed on Airbnb about this particular dwelling:

We know ninjas need sleep too so we have three bedrooms upstairs for you to get your zzzs on. We also hooked you up with free pizza delivery and some swag for you at check-out.

Our lair is your lair….we’ll have our peeps meet you at the front door to hand off the keys and show you around. You’ll be stoked!!

Dude! I told ya we’re out. Got evil to fight, battles to win. So we won’t be there.

Other Things to Note

For every guest that stays, we’ll donate some dough in their name to PACER’s National Bullying Prevention Center. Together we can shell shock bullying, cause that’s what bros do.

If dates are sold out, follow @TMNTMovie for hints on when we’re out of the Lair again so you can crash.

Teenage Mutant Ninja Turtles: Out of the Shadows arrives in theaters on June 3, 2016. For more info and pics on the Lair, click here.