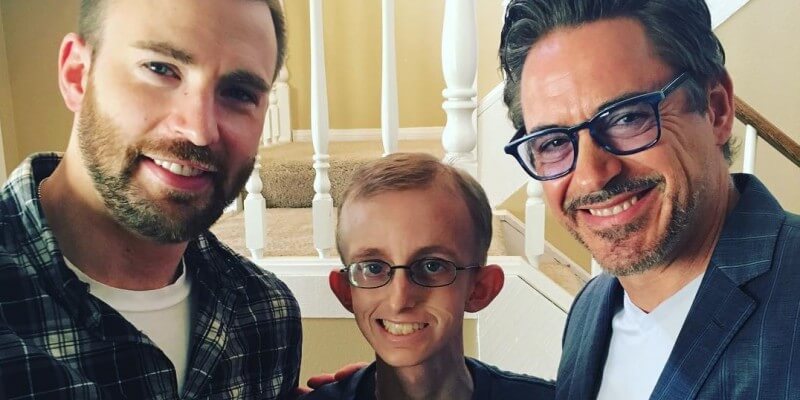 On a regular Monday, a young Marvel fan got to find out that there is real life heroes out there.

Ryan Wilcox, an 18-year-old battling cancer for the second time in his life got the surprise of his lifetime when he answered his front door and found a couple Avengers on his door step.

After Wilcox’s cancer prognosis took a bad turn, his schoolmates sent out a call to lift his spirits with a visit from the teenagers hero role models. Answering the call was Civil War stars Iron Man Robert Downey Jr. and Captain America Chris Evans and with Iron Man star Gwyneth Paltrow tagging along to make his day a little brighter.

According to the Hollywood Reporter, the celebrities spent an hour chatting with Ryan and his mom at the teens house. “It was really cool hanging out with them. That really picked me up,” said Wilcox, his voice barely above a whisper. “I’m going to get through this.”

Let’s do this #ryanstrong @robertdowneyjr #chrisevans   A photo posted by Gwyneth Paltrow (@gwynethpaltrow) on May 23, 2016 at 10:09am PDT

Though Captain America may be a fictional hero you can never underestimate the message and importance the Marvel movies can have for a person. For Wilcox, Captain America has been a symbol of strength that has reminded him to keep going through some of the roughest moments of his life. The visit from the stars from the Marvel universe has inspired the teenager to find his inner “super hero” and continue his fight.

“Strength doesn’t really come from muscle,” Wilcox said, repeating the quote he coined that now is on T-shirts sold to raise funds for his cancer treatment. “It comes from your spirit, and your heart and love.”