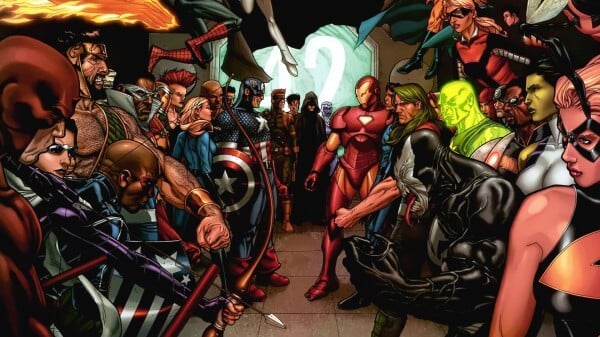 With “Captain America: Civil War” on the horizon and with everyone on either Team Iron Man or Team Captain America (I am on Team Starlord, “Guardians Of the Galaxy” forever!), some of you are probably thinking of picking up the mini series and expecting the same story of superheroes fighting one another as told on screen. Well, that’s where I come in. My name is Keith and I’ll be your guide today taking you through Marvel’s classic mini series “Civil War.”

Let’s go back to the year 2006. Shakira’s hips didn’t lie, people were trying to figure out what was going on on “Lost” and the only thing that tweeted was a bird outside your window. Also, this year was the middle of a creative boom for both Marvel and their Distinguished Competition. The House Of Ideas had a plethora of high quality titles, especially with Brian Michael Bendis and Alex Maleev’s run on “Daredevil”, artists Frank Cho and Mike Deodato Jr’s run on “New Avengers”, Ed Brubaker and Steve Epting’s run on “Captain America”, J Michael Straczynski and Deodato Jr’s run on “the Amazing Spider-Man” and Joss Whedon and John Cassiday’s arch on “Astonishing X-Men.”

It was a great time to be a comic book fan. Your hard earned $2.50 was well spent on a comic book. No buyer’s remorse. While all those titles were great and still hold up, “Civil War” was the standout title for Marvel in the 00’s.

Written by Mark Millar (“Wolverine: Old Man Logan,” “Ultimate Fantastic Four”) and drawn beautifully by Steve McNiven (“Captain America,” “Uncanny Inhumans”) “Civil War” tells the story of a disaster with mass casualties happening with a team called the New Warriors while they filmed a reality show. After public outcry, the government comes up the Superhuman Registration Act. This gives the heroes in the Marvel universe an ultimatum: get registered with the government or get arrested. Iron Man is for it cause he thinks it legitimizes superheroes while Captain America opposes it because he feels it goes against people’s civil liberties. The SRA goes into effect, Iron Man and the pro SRA heroes hunt down Captain America and his band of heroes who are now seen as fugitives in the eyes of the law and other twists and turns happen that I won’t spoil. Millar and McNiven did their best work to date on this mini series. Every issue left you wanting to read the next one right away. Millar did an excellent job showing both sides of the issue. You’d hate the SRA one month, but completely see Iron Man’s point of view the next. Plus, Millar’s signature witty dialogue just gave the characters more life and personality.

McNiven put on a clinic on how to tell a story in “Civil War.” It is honestly like he drew this as if it were a movie. Every panel has a cinematic quality to it. You get what would be considered wide shots, establishing shots, close ups, everything. McNiven truly shined.

You never really saw superheroes discussing politics before in comic books other than “Watchmen.” But these weren’t characters you were introduced to one issue before; these were heroes you grew up with and hated seeing them turn on each other. It was friend versus friend. Husband versus wife. Battle lines were truly drawn.

This was Marvel’s “event” book of 2006: their equivalent of a summer movie blockbuster. The story didn’t just take place in the seven issue mini series itself. “New Avengers,” “Captain America,” “Fantastic Four” and a ton of other Marvel books filled in the gaps and tied in as well. What set it apart from other event stories of the time besides the remarkable writing by Millar and the excellent artwork by McNiven was how it was about more than just heroes versus heroes. It tapped in to the post 9-11 paranoia still in the air at the time. It sounds cliche, but this story was about something.

Obviously, I absolutely recommend picking this up before or after you see the movie. You can hunt down the seven issues themselves if you want. The complete story is also available in trade paperback on Amazon, Barnes and Noble or your local comic shop.

Comments Off on A “Captain America: Civil War” primer – Revisiting the greatness of the original comic book mini-series