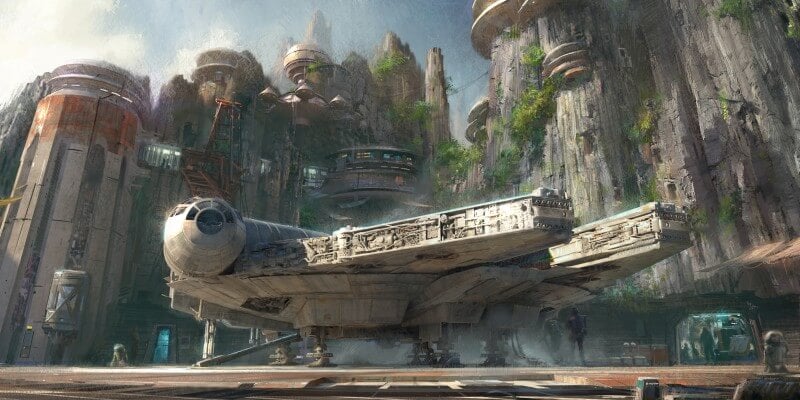 New details and concept art of the highly-anticipated Star Wars-themed Lands coming to Disneyland and Disney’s Hollywood Studios at Walt Disney World were shown to the media at Disney’s Awaken Summer event on Wednesday.

Included in the presentation was a brief overview of some the high-level dining options, how guests will be able to immerse themselves in the Cantina, and video clips of the previously-announced Millennium Falcon ride and another Star Wars attraction were also viewed.

“The other story is an epic Star Wars adventure,” said Scott Trowbridge, of Walt Disney Imagineering and head of the project. “This is an amazing attraction. This attraction puts you right in the middle of a climactic battle between the forces of good and evil, the dark side and the light.

“There’s so much more to see and do at this remote outpost. There’s this great otherworldly street market right behind a unique collection of characters, aliens and droids. Here there are shops, you can sample the local food and try these really cool and unique drinks. That’s actually one of the things I’m most excited about bringing Star Wars off of the screen and into the real world, and that’s that we can bring all these immersive stories to life using all of our senses.”

Lucky for you, we have the full segment right here!

We’ll have more news and information on this breaking story as we get it, keep it here on Inside the Magic for much more!