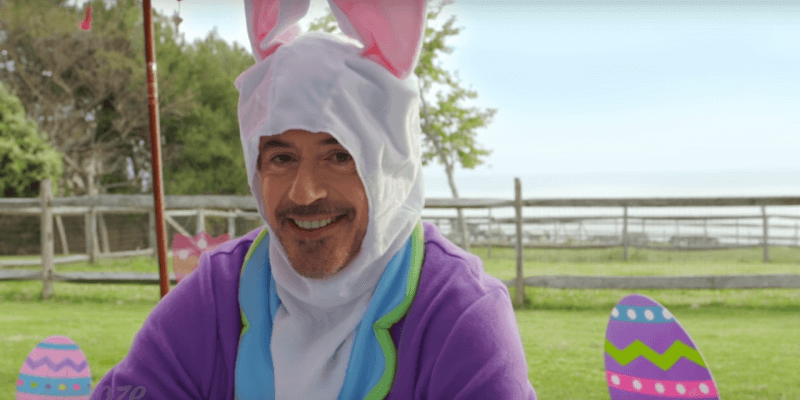 Robert Downey Jr. has donned many an outfit over the course of his career, but this one might take the cake. Iron Man himself put on an adorable Easter Bunny outfit, complete with big floppy ears and a purple sweater, to announce a special private screening of Captain America: Civil War for charity!

Why the bunny suit? The star explains that it was shot during Easter — I say any day is a good day for a bunny suit. No need to explain yourself, Rob. We gotchoo.

The name of a new charity, Random Act Funding, is overseen by Downey Jr. and his wife, Susan. This year it will be raising money for the Motion Picture & Television Fund, Make-A-Wish, and the Anti-Recidivism Coalition. According to Entertainment Weekly, fans who donate more than $10 will be entered to win a chance at Downey’s grand prize, which includes a special Civil War screening hosted by the actor. Sounds pretty amazing, right?

The prize will also include a photo shoot with Downey — complete with props. He’ll also be flying the lucky winners to New York, put them up in a 4-star hotel, and take them to a pizza party at his favorite New York restaurant. Sorry folks, no shawarma. In addition to these fabulous prizes, they’ll be invited to attend Downey’s taping of an appearance on The Tonight Show Starring Jimmy Fallon. Bring it on.

What do you think? You ready to win a date with Downey? Let me know in the comments!