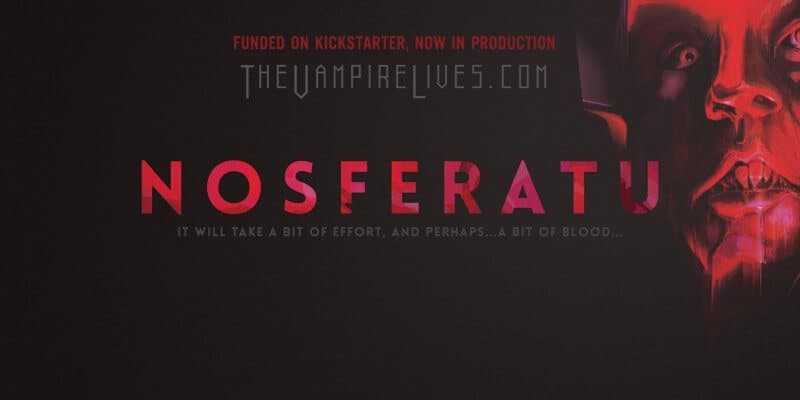 According to a recent report in Variety, the classic silent film Nosferatu is getting a fresh look.  Already in production, the modern adaptation of the 1922 classic will star Doug Jones (as the infamous Count Orlok), Emrhys Cooper, Joely Fisher Sarah Carter and Jack Turner. Nosferatu’s not exactly a full-fledged reboot, but rather a “remix”, according to writer/director David Fisher.  In a process that was perfected in Fisher’s remix of The Cabinet of Doctor Caligari , modern filmmaking (actors, set elements) are blended with backgrounds and elements of the original film.  The process (along with hear-pumping imagery from the project) is better described in the Kickstarter video introducing the world to Fisher’s passion:

The Vampire Lives website is host to the Kickstarter campaign and loaded with eerily exciting images and videos regarding the remix.  Nosferatu was fully funded in its crowdsourcing effort and, as reported by Variety, in production now.  Additional details can be enjoyed by bravely visiting the Nosferatu Facebook site, which gives this synopsis:

Nosferatu: A Symphony of Horror, shot in 1921 and directed by F.W.Murnau, is hailed as both an influential masterpiece of cinema and the seminal cornerstone of the horror genre. The iconic image of Max Shrek’s menacing Count Orlok still lives on today, achieving universal cult status and holding overwhelming positive reviews as the first true vampire tale ever filmed.

We plan to shoot a feature length revisit of the original vampire tale. By remixing the original film with cutting edge filmmaking technology we will resurrect the screen’s most feared Transylvanian back from the grave! Comments Off on Silent no more, Nosferatu “remix” headed for the silver screen