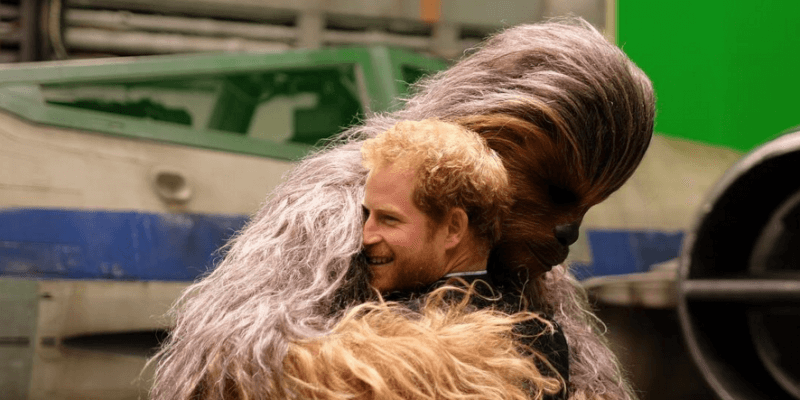 British Royalty met up with galactic heroes recently when Prince William and Harry visited the set of “Star Wars: Episode VIII” at Pinewood Studios in England.

Judging by the photos posted up by the official Instagram account of Kensington Palace, it looked like the coolest day ever with hugs from Chewbacca himself, some quality one-on-one time with BB-8, and some pretty sick photo ops with director Rian Johnson and stars Mark Hamill, Daisy Ridley, and John Boyega.

Prince Harry has made a new friend…

Don’t forget BB-8 – The Duke and Prince Harry say hi to the @starwars cast! A video posted by Kensington Palace (@kensingtonroyal) on Apr 19, 2016 at 6:18am PDT

Time for a @starwars lightsaber battle!

Today The Duke of Cambridge and Prince Harry are travelling to a galaxy far, far away… A photo posted by Kensington Palace (@kensingtonroyal) on Apr 19, 2016 at 3:33am PDT

Prince Harry receives some piloting advice from @hamillhimself Luke Skywalker himself! A photo posted by Kensington Palace (@kensingtonroyal) on Apr 19, 2016 at 6:45am PDT

The Duke in deep conversation with BB-8

Thank you @starwars for a wonderful day! A photo posted by Kensington Palace (@kensingtonroyal) on Apr 19, 2016 at 7:19am PDT

Of course, the Star Wars fan in me wants to know what exactly is going on in some of these pictures. We see a beautifully constructed X-wing fighter with blue markings so it’s definitely not Poe’s, so is it Luke’s? Speaking of the mysterious Jedi, Mark Hamill is seen giving flying tips to Prince Harry from the cockpit of what appears to be an A-Wing fighter, so another possibility is that Luke flies this in the heavily anticipated follow-up to “The Force Awakens”.

Most of all, is something really bad going to happen to Rey’s face? In one of the photos, Prince William is holding a replica head cast as Ridley looks on in amusement. Let’s hope it’s just for modeling purposes.

The answers to all this, of course, will be known when Star Wars: Episode VIII hits theaters on December 15, 2017.