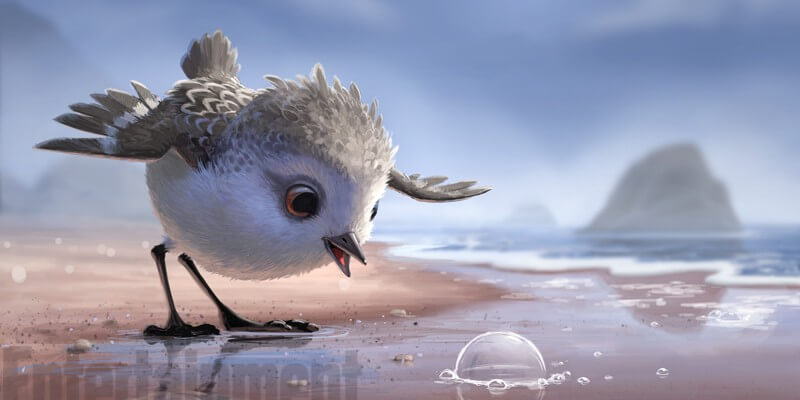 With Disney-Pixar’s newest animated feature Finding Dory right around the corner, fans have been wondering just what the new animated short will be before the main feature starts. Well we have an answer for you! Entertainment Weekly reports that the newest member of the Pixar family is an adorable, big-eyed beach bird named Piper.

According to Pixar, the inspiration for the six minutes short film (about a hungry baby Sandpiper overcoming it’s fear of the water) came from Emeryville, California where Alan Barillaro, a veteran Pixar animator and director of Piper, would gleefully run alongside the shore and noticed thousands of birds fleeing from the water, but returning almost immediately between the waves to eat.

“Seeing the way these sandpipers react to waves and run, I always felt, ‘Gosh, that’s a film, that’s a character,” says Barillaro, who began toying with animation software as a personal challenge to design a non-speaking character who was afraid of the water yet had to venture into it to eat. “It’s always fun to show a world we’re familiar with but from a different perspective. We’ve all been to the beach, but have we ever viewed water from just an inch off the sand? That could be very fearful from a bird’s perspective.”

As the story took on a life of it’s own, Piper became a story of a child learning the ways of the food chain through a parent, and then a child learning from another child, as Piper meets and befriends a tiny hermit crab who teaches her how to get the job done.

“It’s the kid at the playground feeling,” says Barillaro. “You fall down and you feel so small, but you look and see someone even smaller than you brush themselves off and tackle something, and learn from that in your own way. It was important to me to stay in the kid world and see the world from Piper’s eyes, and not be from the human perspective.”