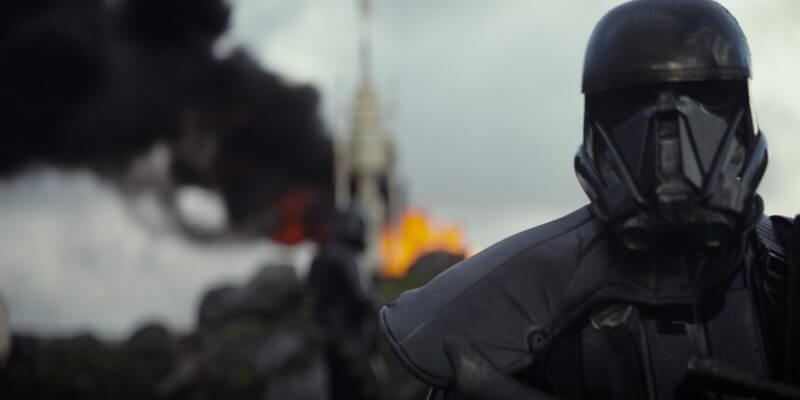 Okay, that was awesome.

The first ever teaser trailer for “Rogue One: A Star Wars Story” premiered on Good Morning America on Thursday and boy did it make an amazing first impression!

This wasn’t just a few flashes of footage either, we see several main characters being introduced to rabid Star Wars fans including Felicity Jones, Forest Whitaker, Diego Luna, Jiang Wen and Ben Mendelsohn. Along the way we see unforgettable images of AT-AT Walkers attacking our brave rebels on a tropical planet, our heroes being pursued by stormtroopers through a subway platform, stormtroopers flying in the air after an explosion just like in “The Force Awakens”, the Empire putting the final touches on the original Death Star, a young Mon Mothma (the leader of the Rebellion who is later seen in the original trilogy) at the original Rebel base on Yavin 4, and a fleeting image of  what looks to be Darth Vader surrounded by royal guards. Oh, and no sign of lightsabers (so far), which feels odd for a Star Wars movie.

Seriously, just watch it over and over again. I know I will!

While certainly evoking the original trilogy, the look and feel of the movie also recalls “The Force Awakens” while also being fresh and exciting on its own terms. The scope of the movie and the intense mission these rebel fighters embark on is certainly epic, but it also looks like there will be plenty of scenes on a smaller, more intimate scale.

“Rogue One: A Star Wars Story” will be released on December 16, 2016. It stars Felicity Jones, Diego Luna, Riz Ahmed, Ben Mendelsohn, Donnie Yen, Jiang Wen, Forest Whitaker, Mads Mikkelsen, and Alan Tudyk. The first “Star Wars Story” spin-off movie centers on a group of Rebels who managed to steal the plans for the Death Star during the events that preceded the original 1977 Star Wars movie that started it all, “A New Hope”. It is directed by Gareth Edwards, and produced by Kathleen Kennedy, Allison Shearmur, and Simon Emanuel, executive produced by John Knoll and Jason McGatlin, and co-produced by John Swartz and Kiri Hart.

For all things Star Wars stick with Inside the Magic! All images courtesy of ©Lucasfilm LFL