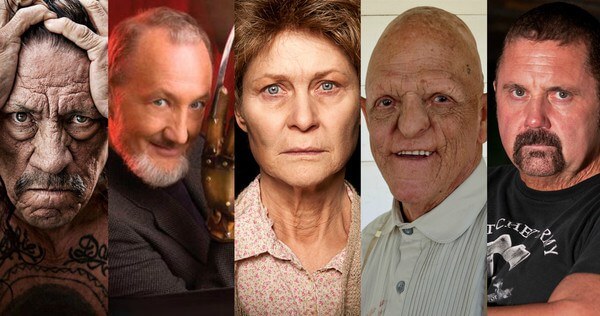 What would happen if every known psychopath, killer, monster –alive, undead or otherwise – were held in a secret government installation –each trapped in a virtual recreation of their natural environment? What if these creatures, so vile and dangerous that they can never be released into the public were actually having ‘scientific’ experiments conducted upon them. What if these monsters were regularly fed live victims in order to study slaying styles of said monsters? Now imagine something goes horribly wrong. Something causes the facility to fail allowing these creatures and killers to escape and run amok in this hellish facility.

Set that imagination aside, and rest uneasy as someone has already dared to dream of just such a delightfully dark insanity – this is the plot of upcoming horror flick Death House. Written by the legendary Gunnar “Leatherface” Hansen and Harrison Smith, Death House was originally set to slash its way onto screens this October, but the recent passing of Hansen has pushed production back for a 2017 release. “The Death House is the Area 51 of Evil… a subterranean government facility that holds humanity’s worst on nine levels. Hell, Dante’s ninth level, holds the Five Evils… the “dark stars” of Death House. These individuals are so heinous they can never walk among society again. They may also be supernatural. Agents Toria Boon and Jae Novak have their own dark pasts, arriving at Death House to tour its levels and observe its denizens first-hand as well as the medical and mental experiments of Drs. Eileen Fletcher and Karen Redmane. Their depraved experiments date back to the Nazi doctors of WWII. Prison cells are virtual reality holo decks that recreate prisoner environments before they were incarcerated. A special hallucinogenic gas keeps inmates under control. The victims are homeless, bused into Death House to play literal victims while killing habits are studied. The results are sick, but only a hint of what goes on here. Hell literally breaks loose inside the facility when an EMP device detonates, killing all power and communication and… releasing every prisoner. Boon, Novak, and Fletcher are caught in a race against advancing prisoner hordes led by occultist Neo-Nazi Sieg. The monsters are freed, and they’re going down. Boon and Novak’s fight through Death House turns into a house of horrors gauntlet; their only hope of escape is descending into Hell and enlisting the help of the Five Evils. Events culminate in a violent face-to-face standoff with absolute evil… only to find that they have traveled down a rabbit hole and through a looking glass. Black is white and white is black and the definitions of good and evil no longer apply. Who are the monsters? Who will escape?”

Comments Off on Death House – a new who’s who, “Expendables” of horror in the works