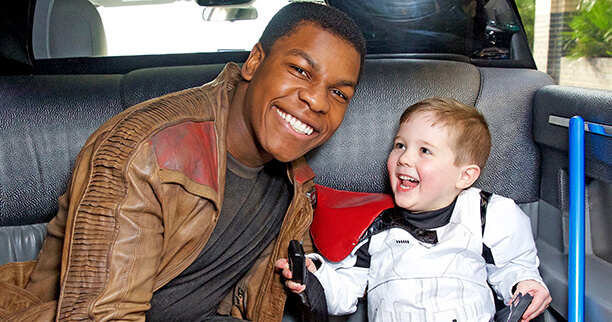 UGH! As if I couldn’t like John Boyega more.

The guy seriously just spent Friday delivering toys from the Star Wars franchise, on behalf of the Rays of Sunshine children’s charity, for sick children at The Royal London Hospital in London. He was joined by 5-year-old Daniel Bell, a little boy who has been diagnosed with a brain tumor, and whose wish it was to meet Boyega’s Finn in the flesh, and hand out toys with him. Alright, I’m good. So the little boy Bell dressed as a stormtrooper (along with a young girl dressed as Rey) delivered toys to multiple kids at the hospital. They even busted out some lightsabers and started whacking each other. Adorably.

“Thank you so so much Rays of Sunshine and John Boyega for granting Daniel’s wish to meet Finn and take toys to the hospital,” Daniel’s mom, Rosalind, wrote on Facebook Saturday. “It was just amazing, I have no words! Daniel is still totally overwhelmed, I have never seen him so happy.”

Entertainment reports that Boyega “jumped” at the opportunity.

“When I heard about Daniel’s wish to meet Finn, I jumped at the chance to make it come true,” Boyega, 23, said, according to the Belfast Telegraph. “It was fantastic to be a part of his very special wish with Rays of Sunshine. It was also great to meet the children at The Royal London Hospital and be a part of something so positive.” It’s really something special when your heroes are actually heroes, ya know? What do you think? Let us know your thoughts in the comments below!