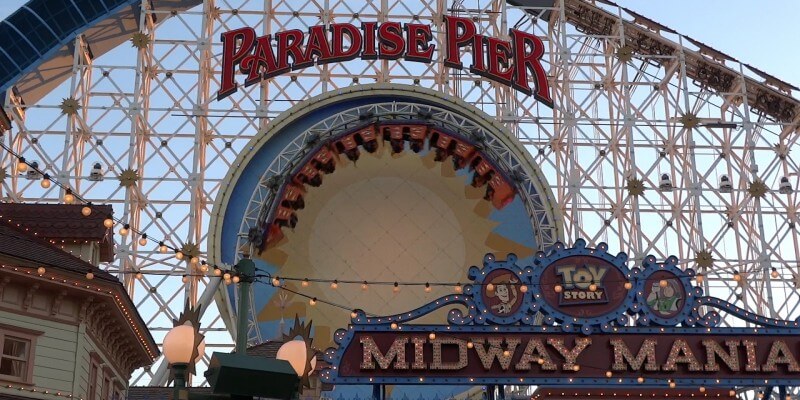 We’ve been celebrating the 15th anniversary of Disney California Adventure since February 9th’s early-morning celebration at the park, which makes this a perfect time to check out some new on-ride videos of a few of DCA’s most enduring rides.

One of the very few rides to debut on opening day of the park that are still in operation, California Screamin’ is a 6,000-foot long, 120-foot high steel roller coaster that is meant to emulate the look and feel of some of the most famous wooden coasters at pier-based amusement parks up and down the California coast.

When this “wild mouse”-style roller coaster opened with California Adventure on February 8th, 2001, it was known as Mulholland Madness and inspired by the winding roads of the Hollywood Hills. The ride was re-themed in 2010 to incorporate the Goofy character and the tone of his famous “instructional” Disney cartoons from the 1940s such as “Goofy’s Glider,” but the track layout remains the same.

This ride originally opened as Superstar Limo, but shut down before the first anniversary of the park. The fully re-themed version reopened four years later and has been operating ever since. It is the only Monsters, Inc.-inspired dark ride in the American Disney parks, although Tokyo Disneyland has a much more technologically-advanced version called Monsters, Inc.: Ride and Go Seek.

Of course, be sure to also check out some of our previous videos of rides and attractions at Disney California Adventure, like Radiator Springs Racers, Mater’s Junkyard Jamboree, Luigi’s Rollickin’ Roadsters, Luigi’s Flying Tires, The Little Mermaid, both ways on the Red Car Trolley, World of Color: Celebrate!, and the current Five and Dime show on Buena Vista Street.

And check back in for more from the fabulous fifteenth anniversary of Disney California Adventure!

Comments Off on VIDEO: Experience some of Disney California Adventure’s most popular rides during the park’s 15th anniversary at Disneyland Resort