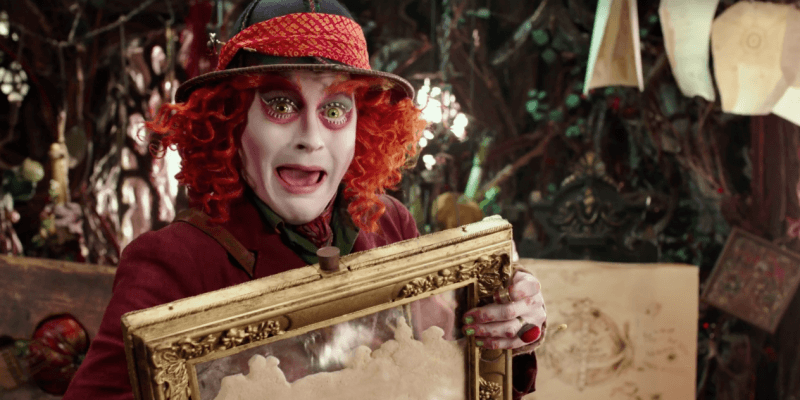 In Disney’s all-new feature film, Alice Through the Looking Glass, Alice returns to the crazy world of Wonderland to save the Mad Hatter. Only this time, she has to travel back in time to do so, and chaos will ensue! Here’s a brand new panoramic poster and the official summary:

When Alice wakes up in Wonderland she must travel through a mysterious new world to retrieve a magical scepter that can stop the evil Lord of Time before he turns forward the clock and turns Wonderland into a barren, lifeless old world. With the help of some new friends, Alice must also uncover an evil plot to put the Queen of Hearts back on the throne.

A modern adaptation of the classic children’s story “Alice Through the Looking Glass” written by Lewis Carroll, which continued on from the popular “Alice in Wonderland” story. This time Alice is played by the mother, who falls asleep while reading the the bedtime story to her daughter. Walking through the Looking Glass, Alice finds herself in Chessland, a magical and fun world. There she meets the Red and White Queens, as well as many other amusing friends on her journey across the chessboard countryside on to become a crowned queen.

Lucky for all of us, Disney has just released a brand new trailer featuring the upcoming wacky adventure and the over-the-top denizens of Wonderland! Take a look:

Hello, Alice! Watch the brand new trailer and prepare to go #ThroughTheLookingGlass on May 27.

There will also be an exclusive live Q&A session on Tuesday, March 29 at 2:00pm (PST) with none other Johnny Depp and director James Bobin.

The film is written by Linda Woolverton based on characters created by Lewis Carroll and produced by Joe Roth, Suzanne Todd and Jennifer Todd with Tim Burton and John G. Scotti serving as executive producer. Make sure to check it out when it hits theaters May 27th!