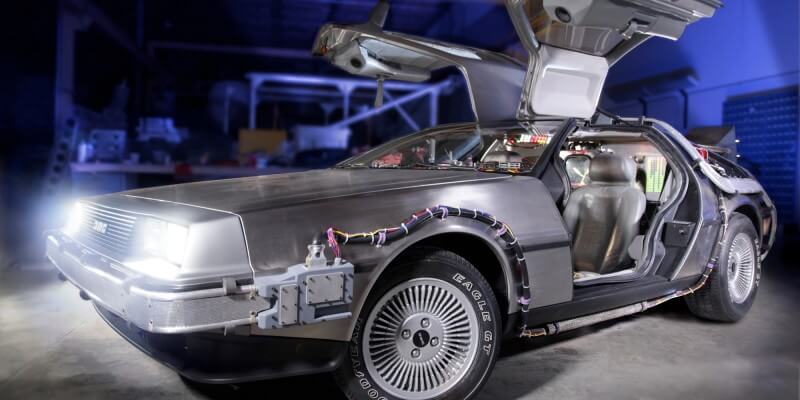 “When this baby hits 88 miles per hour…”

Looks like the original DeLorean time machine from Back to the Future is heading to its new home at the Petersen Automotive Museum in Los Angeles. The iconic automobile from the Robert Zemeckis sci-fi trilogy will be accelerating over to their show floor from it’s long-time home at Universal Studios Hollywood, where it has been on display for many years. According to Slashfilm, museum members and the media will have an opportunity to take a first look at the car’s display at an exclusive unveiling on Wednesday, April 20th complete with a panel discussion featuring Back to the Future writer and co-creator Bob Gale and Universal Studios Hollywood Creative Director John Murdy as well as the movie car builders and technicians in charge of restoring the DeLorean back to its original condition.

The car will make its public debut at the museum on Friday, April 22nd. This will kick off a month-long celebration of the car and Back to the Future.

Larry Kurzweil, President of Universal Studios Hollywood, had this to say:

“The Back to the Future films are part of Universal Studios’ legacy, and we take enormous pride in preserving its history. From the original movie sets on the Universal backlot to the DeLorean that has been on display for guests from around the world to enjoy, the films continue to resonate and we are incredibly pleased to share this iconic hero car with the Petersen Automotive Museum to enable future generations to go back to the future.” So here’s the cool part: on Saturday, April 23rd there will be an Enchantment Under the Sea dance, as seen in Back to the Future, and a Back to the Future tribute band The Flux Capacitors will be rocking out all night. Tickets will be $40 for the public, or $20 for museum members.

DeLorean car owners are also invited to take part in a special themed “Breakfast Club Cruise-In” on April 24, complete with a contest with awards given out for Best-In-Show, People’s Choice and Petersen Perfection. There will also be a screening of the original movie on June 8.

For more info on the exhibit and the special events planned, check out the museum’s official site.