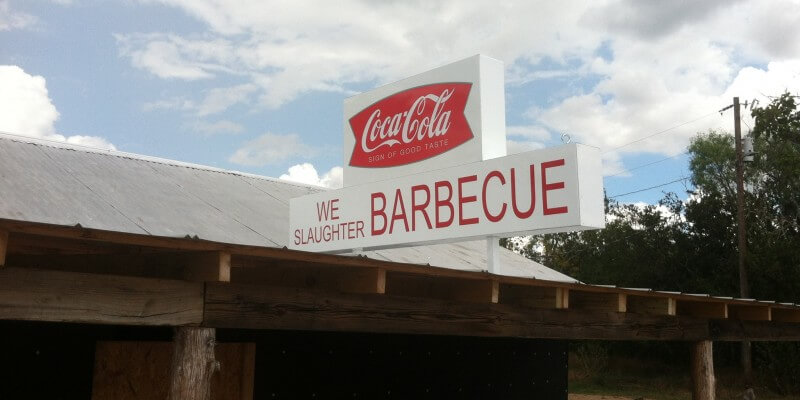 1073 Highway 304 in Bastrop Texas may be familiar to fans of The Texas Chainsaw Massacre.  This is the site of the film’s gas station/barbecue joint where the Hardesty’s and friends stop on their way to the to visit the family homestead.  An iconic scene, the gas station set the tone for one of the most popular “modern” horror movies of its time.

The 1974 movie was shot for less than $300,000 and ended up grossing over $30 million.  It was touted as a “true story” when it was released, but in truth, only the Leatherface and minor elements of the story were based on Ed Gein, the real life murderer.  Texas Chainsaw Massacre set the scene for the Horror/Slasher genre and even spawned two sequels.  The cult classic was rebooted in 2003 and was soon followed by a prequel and two more sequels.

Roy Rose, who was entranced by the 1974 film when was just 10 years, just acquired the property of his dreams – the very same gas station used in the movie.  Now, along with his partner, Ari Lehman (the first actor to play Jason Vorhees in the first Friday the 13 film of the same era), the site is being restored to movie time majesty and is being transformed into a resort that is sure to thrill horror fans from all over.

Construction is set to be completed this summer.  “It’ll be a safe and fun and scary place for families and everybody to come and have a good time” Roy Rose said in an interview he gave to NBC affiliate KXAN.  According to the interview, Rose plans on adding more TCM memorabilia to the site (and can be contacted via email should anyone with to part with their Leatherface keepsakes). Fans of the movies that made chainsaws a mainstay in most Halloween events can follow the construction at the Texas Chainsaw Massacre Gas Station Facebook page or the soon-to-open hotel at TCM-Gas-Station’s Facebook page.  (Images used are from those pages).

Would YOU make The Texas Chainsaw Massacre Gas Station Hotel part of YOUR vacation plans?  Comment below.