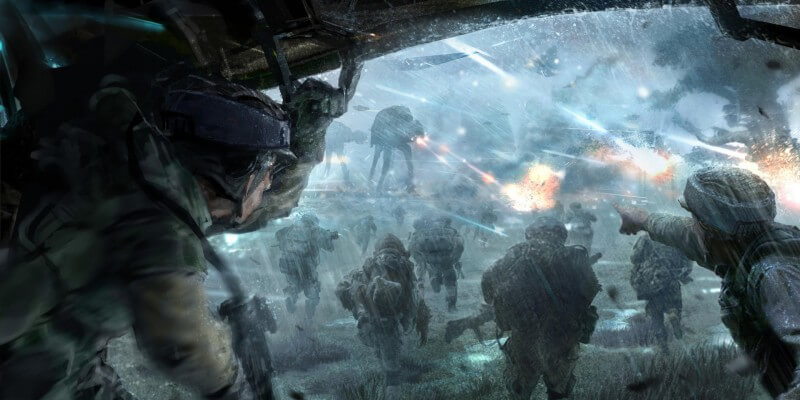 Sure, it’s true that Star Wars: Episode VIII won’t hit theaters until 2017 (pause for tears), fans at least have Rogue One: A Star Wars Story to salivate over in December!

For those not in the know — and how dare you — the film is the first in a brand new standalone Star Wars anthology movie series, director Gareth Edwards’ Rogue One has been keeping things a little private over the years. Until now.

At the annual Disney shareholders meeting in Chicago on Thursday, a little more insight was provided about Rogue One. During the meeting, Disney CEO Bob Iger showed everybody a sizzle reel for the film that confirmed that it does indeed take place right before the events of Episode IV.

“It’s our first original standalone Star Wars story. It’s about a band of rebels who are plotting to steal the plans for the Death Star.” Iger continued, “The action takes place right before the events in the very first Star Wars movie, Episode IV, which was called A New Hope. And I can’t wait for you to see it, it’s in theaters this December.” Iger then went on to show off exactly what new Star Wars film will look like in the sizzle reel. ScreenRant reader Matthew Hansen had this to report:

Most of it was very quick. A shot of the black stormtrooper, possibly called Death Troopers as previously reported, another pic of that same style of helmet and armor but all chrome, reminiscent of Captain Phasma from The Force Awakens, an image showed two AT-ATs that had a slightly different look with the door panel on the side of the body painted a lighter beige color. And a couple cast photos were shown, one of Felicity & Diego Luna and another of Donnie Yen. The clip featured Felicity’s character on what looked like the inside of a ship or shuttle with her arm up holding on and the hatch/ramp open behind her. I wish I could remember what she said as part of the sizzle but it went by too fast. The new stormtroopers looked great.

According to the reader, the footage shown seems to have that classic look and feel of the original trilogy. The plot centers around a group of Rebels attempting to steal the blueprints for the original Death Star, and Darth Vader is said to make a long-awaited return. Here’s hoping it’s satisfying enough to appease series veterans.

With an entirely new cast of characters that includes Felicity Jones (The Theory of Everything), Mads Mikkelsen (Hannibal), Riz Ahmed (Nightcrawler) and Alan Tudyk (Firefly), this film is shaping up to be able something completely original, and refreshingly familiar. Fans should eat it up!

What do you think? Are you ready to take another trip into a galaxy far, far away? Let us know in the comments below!