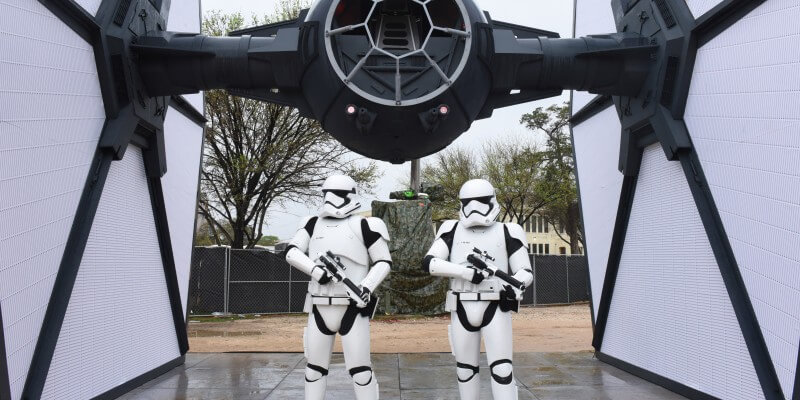 “Look at the size of that thing.”

The promotional campaign for the upcoming home video release of “Star Wars: The Force Awakens” continues onward with the arrival of the First Order at the 2016 SXSW Film Festival in Austin, Texas.

Stormtroopers and a massive TIE Fighter were on hand to help spread the word about the film’s impending Blu-ray and Digital HD release next month, in addition to the world premiere at the festival of the full-length documentary “Secrets of The Force Awakens: A Cinematic Journey” on March 14. This in-depth look at the making of the worldwide blockbuster will be included as a bonus feature on the home video release. The TIE Fighter will continue to be stationed at South Bites at SXSW throughout the weekend for festival-goers to enjoy.

Also included among the bonus features will be an intimate look at the famous table reading that all the stars participated in during preproduction, and a new teaser has been created to give fans a sneak peek of what to expect.

“Star Wars: The Force Awakens” arrives on Digital HD April 1 and can be pre-ordered on iTunes and other digital providers. Fans are also encouraged to explore all things Star Wars at iTunes.com/Starwars. It will be available on Blu-ray Combo Pack and DVD starting April 5.