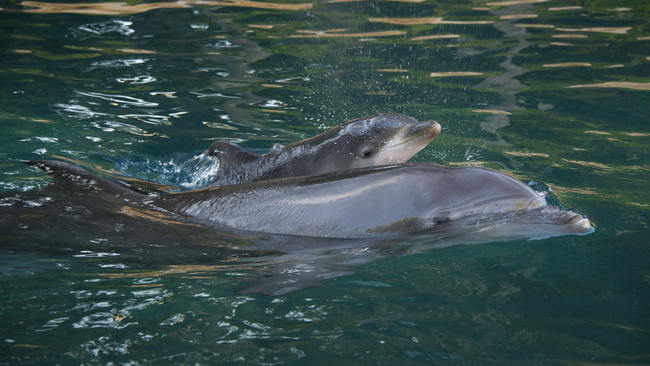 A brand-new female baby dolphin was born at Discovery Cove on February 23. For those who don’t know, Discovery Cove is a SeaWorld aquatic day resort where guests can pay for experiences such as swimming with dolphins, rays and tropical fish.

Her name is Skye, and she weighs in at 52 pounds. She’s also the 30th dolphin to be born at the attraction, and is the offspring of Astra, a 32-year-old who is also the mother of Discovery Cove residents Amara and Aries. Skye and her mother are now in a backstage area and not yet allowed to interact with humans.

According to Orlando Sentinel:

Discovery Cove’s veterinary and animal care team is monitoring the health of mother and the progress of the baby around the clock, watching her behavior, respiration and nursing.  This week, the team performed its initial neonatal wellness exam on the calf.  Mother Astra was nearby. Skye is considered healthy.

For more information, check out discoverycove.com.