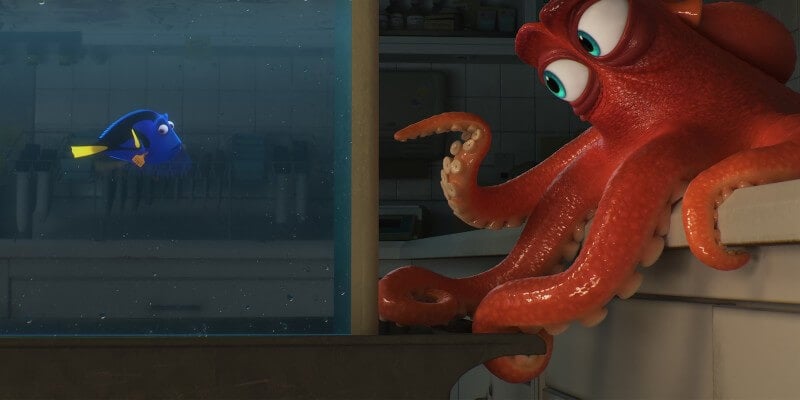 There really was something special about Finding Nemo.

The lessons were strong, the characters were even stronger, and the whole package combined to create one of the greatest animated features of all-time. Now, with the sequel Finding Dory, our cast of characters find themselves in an all new adventure for an all new cause. Ellen DeGeneres and Albert Brooks reprise their Nemo roles here as the forgetful Dory and still-somewhat-neurotic Marlin, respectively.

New characters will also be appearing, including the moody octopus Hank (voiced by Modern Family‘s Ed O’Neill) and a friend that Dory had forgotten in the adorably-delightful whale shark Destiny (It’s Always Sunny in Philadelphia‘s Kaitlin Olson). Idris Elba (who recently voiced Police Chief Bogo in Disney’s Zootopia and voices Shere Khan in the upcoming The Jungle Book) will be rocking out his gruff vocal talents with Dominic West (The Affair) — they’ll be voicing the sea lions Fluke and Rudder. It also looks like Eugene Levy and Diane Keaton will be playing Dory’s parents!

That said, let’s take a look at these brand-new character images from the film: Check out the official trailer below!

We find out how Dory starts reminiscing about her parents and how she wants to be reunited with them, along with a host of familiar faces and new friends that Dory meets on her journey. So what are you waiting for? We seriously can’t wait for June 17 so we can experience the long-awaited sequel to “Finding Nemo”.