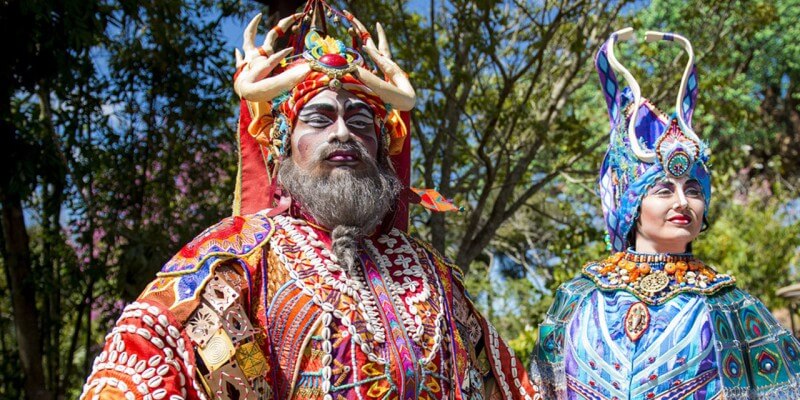 We only have a little bit more than a month until the amazing new nighttime show Rivers of Light debut at Disney’s Animal Kingdom. Today the Disney Park Blog shared with us a closer look at the costumes that the storytellers in the show will feature. The characters Aseema and Aditya will be the main narrators of the show and but they will also have two students, Ambu and Ketu.

Each duo makes a ceremonial entrance at the top of the show in each of their respective village amphitheaters. They then make their way down to the water, where they set out on elaborate lantern vessels.

The four costumes were designed by Irina Kruzhilina and will feature 81 different embroidery motifs, 180 different fabrics and more than 250 various bead designs. The costumes were designed for mythical beings that aren’t supposed to represent any specific time or place but instead took influence from Native American, European and Far Eastern cultures.

Rivers of Light opens April 22nd at Animal Kingdom. Will you check it out?

Comments Off on PHOTOS: A closer look at the costumes for the upcoming Rivers of Light show coming to Walt Disney World