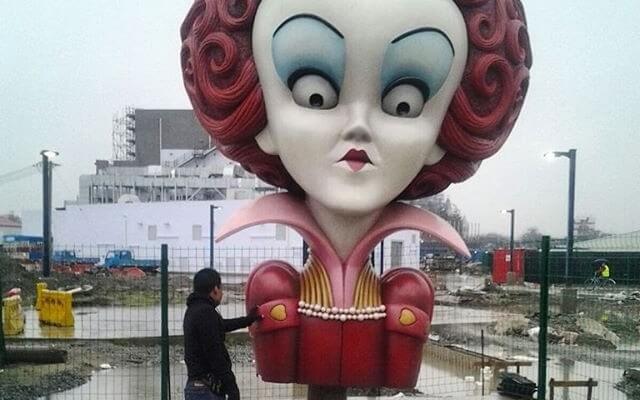 New footage and pictures from the construction of the upcoming Shanghai Disneyland park are arriving almost daily now as we get closer to its June 16th opening. Today we are going to take a closer look at the Alice in Wonderland maze that will be located in the Fantasyland section of the park. Most of the images were shared on the Chinese social media site weibo.com.

The attraction at Shanghai Disneyland takes its cue from director Tim Burton’s 2010 feature film, Alice in Wonderland. Johnny Depp starred in the big-screen odyssey back to “Underland,” which sparked the park’s brand-new glimpse into the eccentric environment that remains a favorite with fans to this day. Join the Mad Hatter, Cheshire Cat and a fantastical cast of characters as you disappear down the rabbit hole. Inspired by Tim Burton’s Alice in Wonderland, this enchanted adventure surrounds you with huge blooms, giant hedges and hidden delights around every corner.

Enter the maze through one of three doors, each providing a different route into the dream-like landscape where Alice and her pals await. Wonderland Garden
Meander down these peculiar little paths to discover a land full of wonder, mystery and danger—the beastly Bandersnatch, glowering flowers and whimsical armored creatures steer you toward a secretive underground cave. You needn’t be mad as a hatter to continue! Red Queen’s Garden
“Off with your head!” Heart-shaped arches, mighty knights and ruby rose bushes indicate you’ve arrived in the Red Queen’s courtyard. Climb the tower for a sneak peek of the ultimate tea party or stop by the Queen’s throne for a royal photo op. Love her big bulbous head? Funhouse mirrors flanking the door will do wonders for your image. Would you take a trip into the Alice in Wonderland maze?