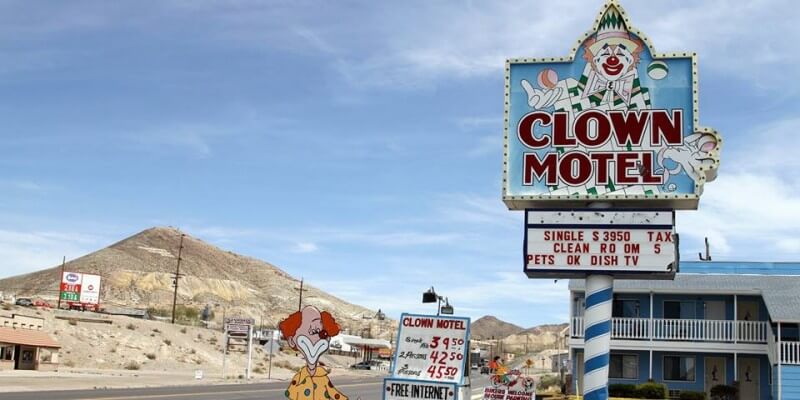 The Oxford dictionary describes an “Extreme or irrational fear of clowns” as coulrophobia, and its more common than one might think.  The term surfaced in the 1980’s (as did an increase in the fear of the colorful entertainers).  One thought is that movies like Stephen King’s IT and the cult classic Killer Clowns from Outer Space contributed to the clown concerns, taking what was once a humorous laughable performer and replacing it with a monster. That fear, being nothing to laugh at, prompts us to issue this warning: those readers who ill at ease with the grease-painted circus comedians may want to leave the tent for this story. . .

ROAD TRIP!  Long before Disney and Universal dominated the travel/vacation destination empire, roadside attractions were scattered across the country as must-see stops (or even destinations) for summer trips.  The Clown Motel at 512 N Main Street in Tonopah Nevada may just be one of the more bizarre (if not terrifying) of those destinations.  Boasting more than 600 clowns (dolls, collectibles art) as part of the décor of the two story motel, this tribute to big top bozos mostly caters to bikers and truckers as a last respite before traversing the desert. Aside from the uneasy vibe from hundreds of creepy clown collectibles, guests swear they feel like the place (if not the entire town) is haunted.  This may, or may not, have to do with the “residents” who share a lot with the Clown Motel.  Located next door is the Old Tonopah Cemetery (est. 1901) –which can be seen from some of the second floor hotel rooms.  An active cemetery for only 10 years, it is the final resting place for victims of the Tonopah Plague (1902) and the miners who perished in fire in 1911.  According to atlas obscura the nearby Mizpah hotel and Silver Rim Elementary School seem to see more of the activity. Experts say the best way to conquer your fears is to face them. . .Would YOU stay at the Clown Motel (or have you)?   Comment below.

Comments Off on No Clowning around – there REALLY is a Clown Motel (and you won’t believe what’s next door!)