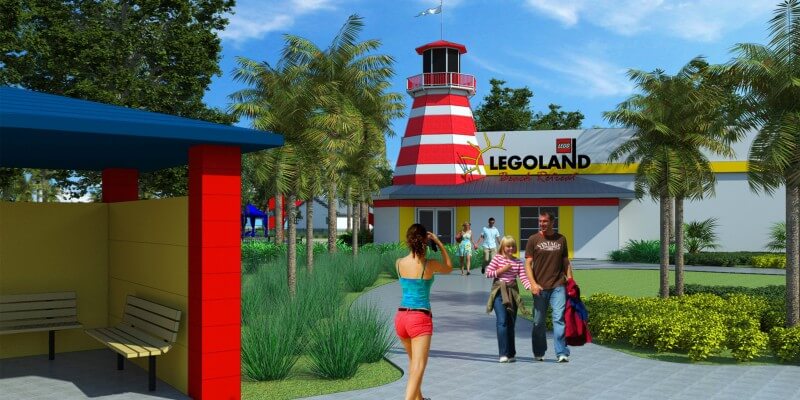 LEGOLAND Florida Resort has revealed plans that will mark the park’s biggest expansion ever with a lakefront resort, a brand new Ninjago World complete with a brand new ride, a new 4D movie and more fun activities to enjoy at the water park.

The announcement Tuesday morning included not only a new Ninjago ride but an accompanying land to go with it. Featuring groundbreaking technology by Triotech, guests on the LEGO Ninjago ride will be able to take part in a “magical, martial arts kingdom where they’ll experience a first-of-its-kind attraction that blends eye-popping, 3D computer animation, and ‘4D’ atmospheric effects.” Four riders per vehicle will blast enemies with animated fireballs, lightning, shockwaves and more by using just their hands — making it truly interactive and a unique experience. Completing certain tasks will earn riders points and their scores will be displayed on the screen as they hone their skills.

To get an idea of what’s in store for guests — I mean, Ninjago warriors in training — check out this demo of the ride’s tech that was presented at the IAAPA Expo late last year.

The new ride will be part of a new area that will feature “multiple hands-on, interactive experiences that will hone kids’ physical skills” in preparation for their quest.

LEGO Ninjago World is set to open in early 2017.

LEGOLAND Florida also announced LEGOLAND Beach Retreat, a “whimsically themed vacation resort” that promises to combine the “fun of surf, sand and sun with the creativity of LEGO® on a picturesque site next to Lake Dexter.” The new resort overlooking Lake Dexter adjacent to the park will boast 83 single-story duplex units, offering 166 separate accommodations for up to five guests each. Along with a colorful LEGO lighthouse, the new resort will feature a themed pool, a sandy play area, a buffet-style restaurant and complimentary transportation to and from the theme park.

If aquatic fun is your thing, the previously-announced Build-A-Boat expansion at the water park is now open for guests to enjoy. Inspired by the popular LEGO City Coast Guard sets, kids can construct LEGO watercraft and set them off through fast-flowing rivers on races.

Based off the newly launched TV series, this theatrical attraction is set in the futuristic Kingdom of Knighton and stars five young knights that will go up against the evil Jestro and his sidekick, the Book of Monsters, “in a battle for control of a rare book of magic that gives its owner tremendous power.”

The 12-minute show promises an immersive experience combining 3D computer animation with 4D real-world effects such as light and wind to help make the action come to life for viewers.

Guests will also want to hunt around the park for six exclusive shields that unlock “NEXO Powers” within the LEGO NEXO Knights: Merlok 2.0 mobile app.

Also coming this summer is the new LEGOLAND Night Lights event in June. Held exclusively at LEGOLAND Florida resort, this celebration of summertime fun features extended hours at the park, special meet-and-greet with your favorite LEGO characters and exclusive opportunities to build alongside LEGO Master Model Builders. The highlight of the evening is a “spectacular, brick-tacular NINJAGO fireworks display that will light the night above Lake Eloise with brilliant colors and triumphant music.”

It gets even better, the special party will be included with park admission! It’s scheduled to take place every Saturday and Sunday from June 18 to July 31.

The new additions add up to the largest expansion of LEGOLAND Florida Resort in its four-and-a-half year history. Inside the Magic will be covering all the announcements on location at the park with exclusive interviews, video and much more so keep it here for more info!