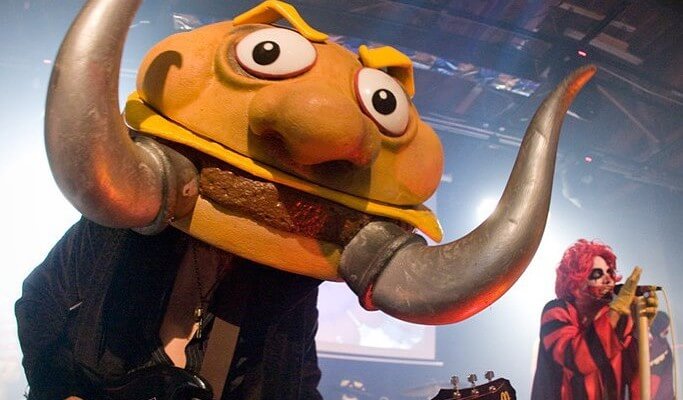 Billing themselves as “Drive Thru Metal”, the very real Mac Sabbath is a fast food parody married with the classic sounds of Ozzy/Sabbath that has to be seen to be believed. Founded in 2013 when band manager Mike Odd had a chance encounter with “Ronald Osborne”:
I was devouring a cheeseburger in a Chatsworth, California, franchise of a certain multinational fast food conglomerate which shall remain nameless. Out of the corner of my eye, I noticed a crazed looking clown walking in my direction . . . he had a concept I might appreciate, something he termed “drive-thru metal.” Some of the delinquent kids who worked for the franchise had been allowing him and a cast of characters named Slayer Mac Cheeze, Grimalice, and the Cat Burglar, to perform secret rock shows in the bunker-like basements of the local restaurants. But the time had come, he said, to bring drive-thru metal up from the “underground.”

(Mac Sabbath Facebook Page –NOTE: the entire backstory – in the about section – is an amusing anecdote of epic –supersized- per-portions).

Mac Sabbath has been sharing its “culinary disgrace” with audiences and critics ever since.