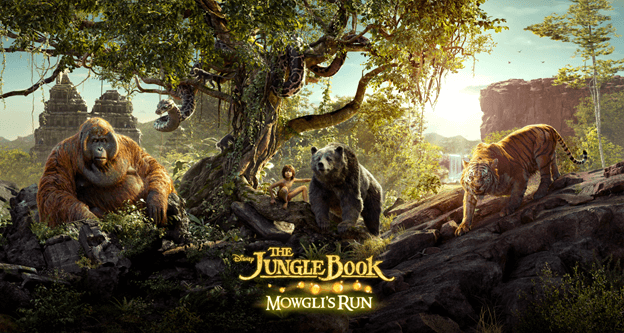 You may not want to brave the jungle as young Mowgli does in Disney’s upcoming “The Jungle Book” after seeing some of the more fearsome animals slithering and jumping around in the trailers, but now fans might just have the next best thing.

Armed with your mobile device you can now engage in a “fast-paced parkour style runner” game with Disney’s brand new The Jungle Book: Mowgli’s Run game!

As for the gameplay, the press release promises some high-flying action along with the bonus clips from the live-action adaptation in advance of the film’s release on April 15:

Players will use swipe and tap controls to run as Mowgli through stunning jungle environments inspired by the film while sliding under low branches and leaping from tree to tree. Collect honey drops, and unlock power-ups to go faster and farther, all while dodging Shere Khan, King Louie, Kaa and other dangers. Best of all, it’s available now for free on the App Store and Google Play Store. Now go out there and explore that jungle!