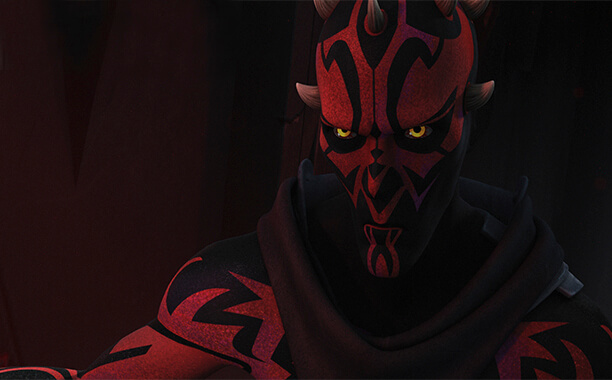 A very mysterious and familiar figure appeared in the second season teaser for Star Wars: Rebels. At a glance, it was easy to make out the tribal looking tattoos, big yellow eyes, and that all-too-noteable gruff voice.

Darth Maul is returning to the Star Wars universe. While most fans will remember him from The Phantom Menace, more diehard fans will lovingly recall his tenure in animated series The Clone Wars, which gave some much needed and welcome depth to the horned Sith Lord. He was driven into madness, and it became one of the defining points of his character — basically, much better than anything we have seen on film. Now, it looks like he’s going to be training budding Jedi Ezra Bridger in Rebels, and a new chapter for Maul approaches.

Entertainment Weekly had an interview with executive producer Dave Filoni and voice actor Sam Witwer about bringing Darth Maul back to the Star Wars mythos.

“The genesis of this idea is actually kind of an interesting one. I had pointed out several times in story meetings that we have an opportunity – if we wanted to – to actually have Darth Vader fight Darth Maul,” said Dave Filoni, “That was something that [co-producer] Simon Kinberg and I were like, ‘Oooh…’ Then there was the opponent in the story meetings who would say, ‘Well, that’s fan service,’ and I’m like, ‘Yeah –exactly.’ [Laughs] I don’t see the problem with that, but you know we were very careful that we don’t just do things because they’re cool. We want to do things that are story driven.” Filoni also spoke out about when we can expect the two to battle.

“I have to say that by the end of it, the story was completely different than where we had started. I don’t want to necessarily promise something that doesn’t happen – the Vader/Maul thing is interesting at a fandom level. [But] the more compelling personal story becomes about Ahsoka and Vader.”

Clone Wars fans have been treated to an all new storyline in Rebels featuring Ahsoka, Anakin Skywalker’s first apprentice, and now grizzled war veteran. Filoni shed some light on how transitioning from Ahsoka’s story into Maul’s new chapter will affect the series as a whole.

“We’ve taken all season long to educate viewers that maybe haven’t seen Ahsoka before about what her relationship to Vader is. But then we had this other thing where we all liked Maul… Maul could be a fantastic foil for Ezra, a counterpointed dark-side mentor. He’s not necessarily the dark-side Emperor Sith.”

You can check out the full interview here. Are you excited about Maul making his return? Let me know your thoughts in the comments below!

Comments Off on Darth Maul strikes back in “Star Wars: Rebels”!