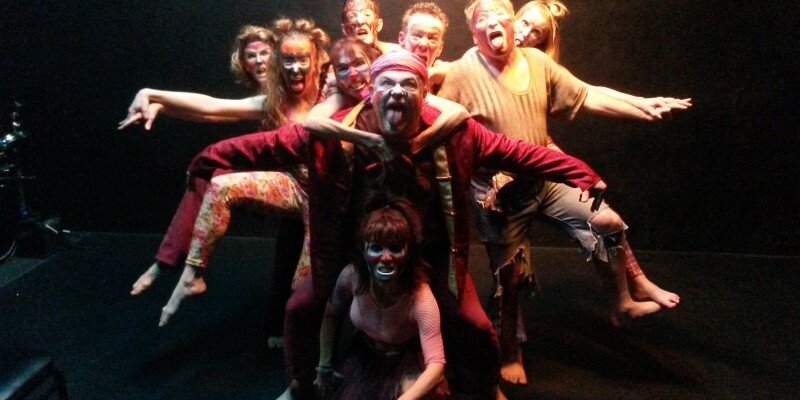 As I enter the familiar black box theatre of Zombie Joe’s Underground, I am once again presented with a new arrangement of the space for the audience to enjoy the show. Zombie Joe’s really is a small space fitting what seems like no more than thirty-five seats, so it is always surprising when many of their shows figure out a new configuration of the space. In the case of “Year of the Monkey”, audience members are told to feel free to grab a seat or stand around the space and move around the show avoiding the taped off areas. This immediately sets the tone that we’re in for another unique theatrical experience at Zombie Joe’s. The show begins with a lone “monkey” moving into the space to occupy a small drum kit in the corner of the room. This first impression of the monkey made me giggle (in a good way) because it immediately gave me flashbacks of being a child and playing with one of those classic toy monkeys crashing the cymbals. This monkey banging the drums would be a constant throughout the show creating the mood and pace of the mostly unspoken performance.

Moments later the stage is filled with a tribe of monkeys filling every inch of the room. The performers could be seen in all directions including above the audience crawling down the walls into the black box. It is impossible to see everything that is going on around you. You definitely got a different show depending on where you were standing or sitting in the theatre. Year of the Monkey deals with themes of facing your fears as we see the monkeys interact with a dragon they must conquer. People born in the Year of the Monkey are characterized as lively, quick-witted, curious, innovative and mischievous. The image of people in this zodiac sign is of being smart, clever and intelligent. In addition, their gentleness and honesty bring them an everlasting love life. Although they were born with enviable skills, they still have several shortcomings, such as an impetuous temper. All of these characteristics are represented throughout the performance. We see their love shown in moments where the individual monkeys begin breaking off into pairs and then as one large familial orgy-like group. But the love within the group can quickly turn as the space is filled with monkey screams.

As I speak with Adam Shows who plays Caesar in the show he describes a very short rehearsal process which consisted of a lot of trial and error building a show around the themes of this Chinese Zodiac sign and working with no script. This type of performance requires a lot of trust between the cast and it is impressive how quickly that bond was created with the cast of ten in “Year of the Monkey”.