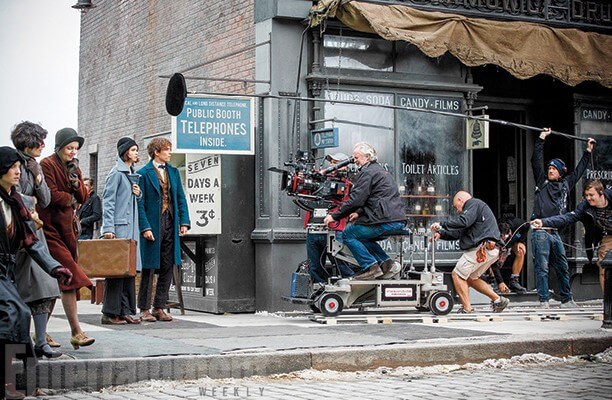 Harry Potter fans attending the “A Celebration of Harry Potter” event over the weekend at Universal Orlando Resort were treated to a behind-the-scenes look at both the upcoming film “Fantastic Beasts and Where to Find Them” as well as the new “Harry Potter and the Cursed Child” play opening in London later this year.

Featuring interviews with the cast and director David Yates, we get a peek at 1920s New York where Eddie Redmayne (“Newt Scamander”) arrives for what should have been a brief visit. At some point the contents of his mysterious briefcase escape and we see him cross paths with two sisters played by Katherine Waterston (“Tina Goldstein”) and Alison Sudol (“Queenie Goldstein”) as well as Joseph, a “Muggle” baker played by Dan Fogler. Though the clip doesn’t feature much in terms of actual film footage, we still get plenty of interesting views of the set as well as the art and costume design set in the Wizarding world of Harry Potter.

“Fantastic Beasts and Where To Find Them” will be released into theaters on Nov. 18, 2016.

Another interesting clip released over the weekend to Harry Potter fans at the event and worldwide was a new look at the upcoming London stage production “Harry Potter and the Cursed Child” play, which is written by J.K. Rowling and is set to begin previews on June 7th, 2016.

In the clip, we get a tour of the Palace Theatre where the two-part play will be staged. It is the eighth Harry Potter story and will be set 19 years after the events of the original books.

Comments Off on VIDEO: Go behind the scenes for “Fantastic Beasts and Where To Find Them”, “Harry Potter and the Cursed Child” play