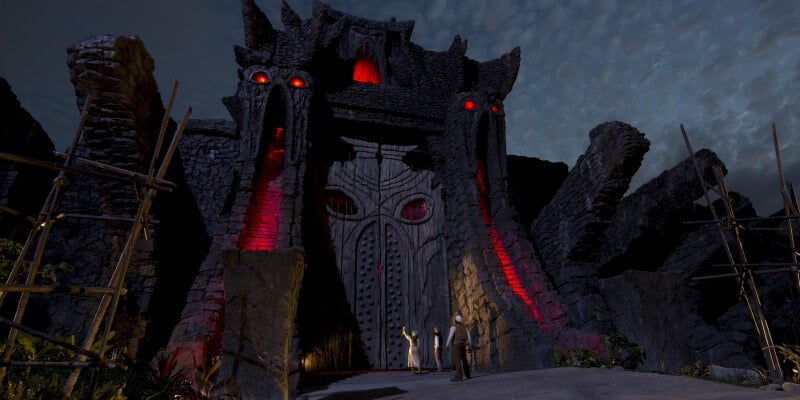 In just a few months, guests at Universal Orlando Resort will finally be able to take their first (tentative) steps into the mighty Skull Island: Reign of Kong attraction that’s planned to open in the summer of 2016.

This amazing new area being built at Islands of Adventure between Toon Lagoon and Jurassic Park has plenty of intrigue going for it, with a rocky terrain visible off in the distance and a menacing King Kong carved into stone near the entrance — almost as a warning for visitors. But for those craving to learn more in the months leading up to its completion, Universal has released the first-ever image of the attraction. On Universal’s site, the ride is being described as the following:

As you journey deep into a mysterious island, your 1930s expedition is swarmed by enormous prehistoric predators. Your only hope is the most colossal ape ever to walk the earth. As the gargantuan beasts fight for dominance, you will just fight to survive. Skull Island: Reign of Kong – A multi-sensory, multi-dimensional new ride for your life. Additionally, a new press release gives further details on what to expect for “one of the longest Universal ride experiences ever created”:

The adventure begins as you set out to explore an island rife with prehistoric creatures of unknown origin –and the legend of a beast still undiscovered. You find yourself at a campsite of the 8th Wonder Expedition Company, the research team leading your adventure.

Once beyond camp, the menacing terrain shows signs of a native presence; beating drums draw you toward an ancient temple. Moving deeper into the ruins reveals a lost shrine – and proof you are not alone. You ignore warnings to turn back.

You board a specially designed expedition vehicle that will take you deeper into the island. Mysterious sounds pierce the air and you hear chanting. And then – you confront an enormous temple wall, complete with carvings and images that seem to pay homage to something you cannot quite comprehend. The temple’s massive wooden doors slowly open, revealing a labyrinth of caves.

Inside the caves, you meet your expedition leader – and suddenly find yourself in the midst of a raging struggle between creatures of incomprehensible size and ferocity. Then, as those creatures turn on you, there is an even more enormous, earth-pounding presence – bigger, closer and more overwhelming than you can possibly imagine. It is Kong. But is he friend or foe?

They’ve also released an informative video today featuring Universal’s Creative Director Mike West discussing the story behind the new Kong ride and what awaits those who are brave enough to embark on an expedition to learn its secrets.

Universal’s newest attraction at the Islands of Adventure theme park opens in the summer of 2016. You can also click here to sign up for updates, as well as check back with Inside the Magic for more!