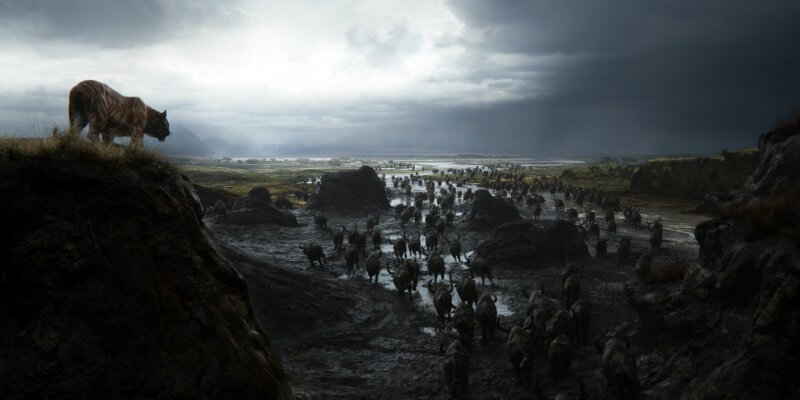 Why remake a classic? That’s the question that filmmaker Jon Favreau set out to answer for a select group of press gathered in Hollywood’s El Capitan Theatre last month, at an exclusive sneak peek of several extended clips from the forthcoming Walt Disney Studios live-action-meets-animation blockbuster “The Jungle Book.”

“The question was, ‘Why do it?’” Favreau booms from his perch atop the El Cap’s huge movie-palace proscenium. “I didn’t go into Disney and say, ‘I gotta make ‘Jungle Book.’ You know what we need? We need a ‘Jungle Book’ now!’ Because you know that it’s been, whatever, fifty years, or, what was it, 1967, it’s been, I hope not fifty… yeah, fifty, because I [was born in] ’66. That’s really sobering. I realized I’m gonna be fifty next year. In front of all of you. Yeah, almost fifty years ago.”

Favreau is a hot property in Hollywood, and has been since his 1996 debut as the writer and star of the indie darling “Swingers.” Since then he’s established himself as a go-to director-for-hire with such family-friendly fare as “Elf,” “Zathura,” and the first two “Iron Man” movies. In 2014 he returned to his more personal, introspective roots with the critical-favorite dramedy “Chef,” and now finds himself on stage at Disney’s flagship El Capitan, paddling upstream in the task of justifying the re-imagining of one of Walt Disney animation’s most enduring classics.

Favreau’s “The Jungle Book” isn’t just a remake, however. This iteration is something else entirely. Shot entirely on a soundstage in Downtown Los Angeles, the movie mixes one live-action actor (newcomer Neel Sethi, who was discovered for the part of man-cub Mowgli after an exhaustive search of two thousand potential leads) with a fully CGI-rendered environment. It’s the next logical step in fantasy storytelling, and Favreau is quick to acknowledge its forebears.

“The idea of going out to the jungle and shooting this, it just felt like it wouldn’t have the magic that the ’67 film had had,” the director continues. “There was a dreamlike quality to it. There was a surreal quality to it. It was a high-water mark for character animation… and to me, that’s what I remember about it. And so I wanted to make sure we preserved that. But what Alan said was, ‘Look at the technology. Look at ‘Life of Pi.’ Look at ‘Avatar.’ Why not use the technology to create a whole world that transports you? Let’s really embrace this new technology and see what we can do if we push its limit.'”

“And thankfully, because the Disney properties have translated well, especially going from animation to live-action, there was a certain confidence that the studio had had to give me the resources that would have been required to do something like this. And [usually] big action spectacles are the only films that seem to make studios comfortable enough to use this level of artistry and technology in storytelling. And so the unique opportunity I’ve had is to use it for humor, and emotion, and showing nature, and showing animals, and getting into that real deep mythic imagery that I think always marries well with technology, and always has.”

Putting together this kind of movie is a massive undertaking, and because of the difficulty and expense in mounting the type of animation used, much of the work is front-loaded into the planning process. Favreau explains, “The way this works is not unlike [an] animated film, in that there’s a team that moves through the whole film. It’s not like a [live-action] movie where you shoot it, you cut it together, and then you just get the effects done. You’re constantly exploring, reinventing, [and] in a film like this, especially, we started off as though it were an animated film, with a story department, much in the same way Pixar does, or Walt Disney would have done, to be honest with you.”

“We had a head of story. We really stress-tested the story, as you would with an animated film, because in animation you don’t want any scenes on the cutting-room floor. It’s always been high-tech, even when it was cel animation, and very expensive to do. So you want to be very efficient. And I think part of the reason that the batting average of a Pixar or Disney animation is so good compared to live-action features, on a creative level, is because so much effort is put into the story before you ever roll camera.”

The development of “The Jungle Book” hinged largely on the available technology, and a big part of that technology was 3D, which Favreau says took him a while to warm up to. “I’ve always weighed out whether it was worth seeing something in 3D or not,” he admits.

“I remember I saw ‘Avatar,’ it was the first time I got what this whole big-screen 3D format thing was about. I got why you had to go to the movies to see that. And it was a great experience. And since then, of course, 3D has been a big piece of business for Hollywood, but I don’t know that anyone has ever outdone the way that the 3D was done there. And I felt like [as an audience member] I was missing out if I wasn’t seeing it that way.”

“And so we shot native 3D [as opposed to post-production 3D conversion] using the Pace system, the system that Jim [Cameron] had been a part of developing. And we used SimulCam, and all this [digital motion-capture] technology that people haven’t really been using. [But] I love film, and I love that Chris Nolan is pushing [for its use], and ‘Star Wars,’ and ‘Hateful Eight’ and all the films that are embracing film. I don’t want to see it go away. But at the same time I think we have to push technology as far as we can, because there [are] other things that digital art is better for.”

“So, why should we do this thing?” Favreau brings himself around again to address the question at hand. “I’ve always been resistant to CG. I’ve always been a bit of a Luddite. If you know my work, ‘Zathura’ used motion-controlled spaceships like the old ‘Star Wars’ movies did. And I used stop-motion and forced perspective in ‘Elf.’ I’ve always been very careful. Only with ‘Iron Man,’ when we were doing hard surfaces, did I begin to believe that CG wasn’t something that would corrupt the experience, but enhance it.

“Then I saw ‘[Rise of the] Planet of the Apes’ and ‘Life of Pi,’ and I started to see glimmers… and even some of the Marvel films, with the Hulk and the Avengers. That wasn’t just hard surfaces and metal. It was fur, it was flesh. I was starting to get fooled. And so, if we really set it up, could we do something that took it to the level where you were watching something that was either photo-real or pleasantly beautiful and elegant and hypnotic, even if we didn’t achieve that level? Could we avoid an Uncanny Valley?”

“And I thought by not doing the kid [in CGI], and setting the kid as a live-action element, just like ‘Alice’s Wonderland’ from when Walt was doing the Laugh-o-Grams back when he started out. A live-action kid in a virtual, illustrated environment. Could we marry it up and would it feel pleasant and cool and inviting? Or would it feel weird and uncanny?”

Favreau then proceeded to share with the audience a series of clips from the movie, and I can now safely convey to you, without spoiling too much, that they did not look uncanny or off-putting in any way. Instead, they looked wondrous, and that’s coming from someone who had barely a passing interest in the new film before seeing the clips in question. It certainly appears as though Jon Favreau and his team have created something refreshing and unique using an existing beloved story and combining it with new, exciting technology. Comments Off on PREVIEW: Take a look into “The Jungle Book” with director Jon Favreau