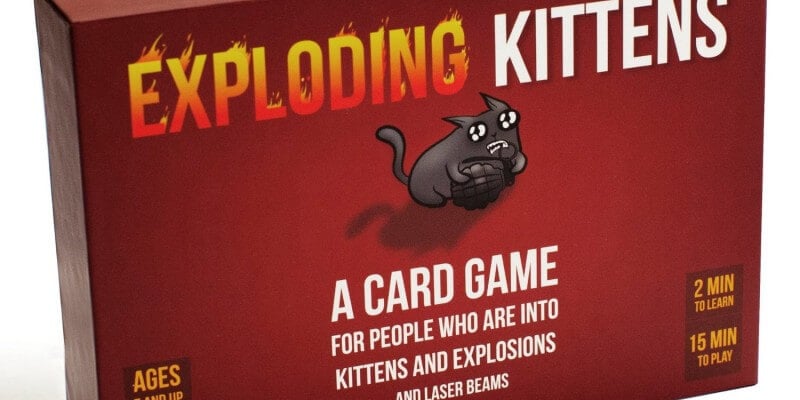 Touted as the most-funded game in Kickstarter history, Exploding Kittens has to be one of the most bizarre, yet kid-friendly card games to ever exist.  The average game takes around 15 minutes to play with a goal of being the last man standing (as long as you don’t draw an exploding kitten card*) and accommodates 2-5 players.

*Fortunately there are ways to diffuse that game ending blast – items like laser pointer, kitten therapy and catnip sandwich cards all will block bombing your way out of the game (losing).

Other diabolical deeds (cards) include an attack by thousand-year back hair; turn skipping via use of the portable cheetah but (skip a turn- no chance of drawing an exploding kitten card); or the deck shuffling plague of bat farts descending from the sky.  For more information and game play rules visit the Exploding Kittens website.

Ordering this whacky, unique card game will set you back $20-30.  Oh, and there IS a “not safe for work” version which includes “boob wizards and sometimes butts” (according to the purchase page on the exploding kitten website). In January, the fur-balls a-flame leapt into the digital domain with a brand new Exploding Kittens iOS game (android version coming soon).  The game requires at least two players, but is NOT dependent on Apple’s Game Center; instead interaction involves internet/wi-fi or Bluetooth connectivity.  The iOS game will set you back $1.99 and has three in-app purchase options (Party Expansion Pack $1.99; Animals Avatar Pack .99 and Food Avatar Pack .99)