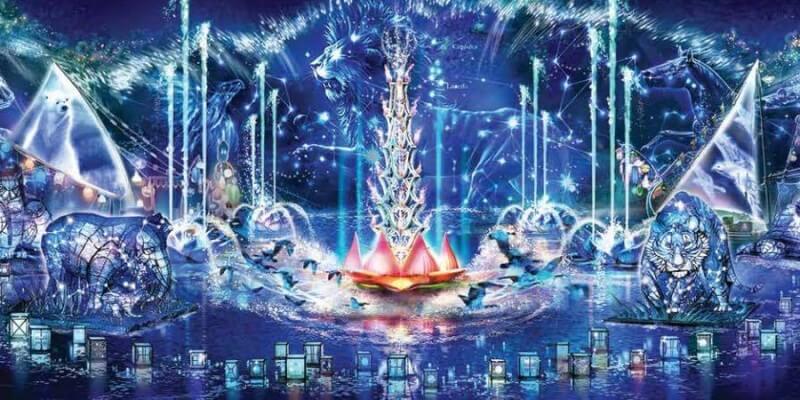 In the newest edition of the Annual Passholder newsletter magazine “The Mickey Monitor”, Disney unveiled some new details and concept art for the upcoming nighttime show “Rivers of Light”, coming to Disney’s Animal Kingdom this spring.

“Rivers of Light pays homage to traditional Asian lantern festivals and this beautiful myth about the aurora borealis,” Michael Jung, Creative Portfolio Executive, Walt Disney Imagineering, told Mickey Monitor. “There’s an ancient belief that when animals passed from one world to another they danced in the sky and became these beautiful rivers of light.” Lotus lanterns open to transform into beautiful fountains. Four huge, amazing animal figures – an owl, tiger, turtle and elephant – appear and morph as their animal spirits awaken and come to life on the water screens. The hosts, the embodiment of fire and water, return and the dramatic finish includes the animals flying out and literally painting the aurora all around you in an almost dreamlike panorama. Of course, the welfare of the animals and the integrity of the Park itself were always top of mind, including not allowing any light projections or special effects to impact the animals or their environments and not installing technical infrastructure into the lagoon area.