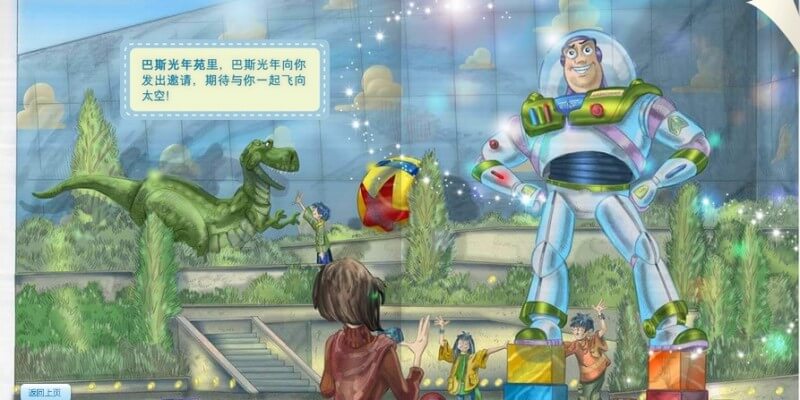 Disney Town will feel very similar to our Downtown Disney/Disney Springs here stateside and will be located right next to the entrance of Shanghai Disneyland Park. This area of Disney Town will be called Spicy Alley and feature waterfront dining.

Disney Town will of course have its own World of Disney Store. The next pictures show the area where the Lion King musical will be playing in the Walt Disney Theater. The Shanghai Disneyland hotel will be the resorts’ 5-star hotel and be themed to an art nouveau style. The lobby of the Shanghai Disneyland Hotel will be very regal and feature a Mickey and Friends statue. The hotel will have a sit-down Beauty and the Beast themed restaurant. This picture of the hotel’s bar has been released before but anything featuring Fantasia is just awesome. The indoor swimming pool will be themed to The Little Mermaid. Some of the artwork that will be found throughout the hotel: Here is a look at a standard room at the hotel. The other hotel opening up at Shanghai Disneyland Resort is the Toy Story Hotel that will be more of a value resort. The entrance of the hotel is heavily themed to the Pixar fan favorite. The lobby will be big, bright and feature lots of Buzz Lightyear and Woody. Here is a look at the layout of the hotel. Very reminiscent of the value resorts here at Walt Disney World. The outdoor area will feature a giant Woody and Buzz Lightyear that will be the perfect picture spot. A standard room at the hotel will feature plenty of theming. Which part of Shanghai Disneyland are you most looking forward to?