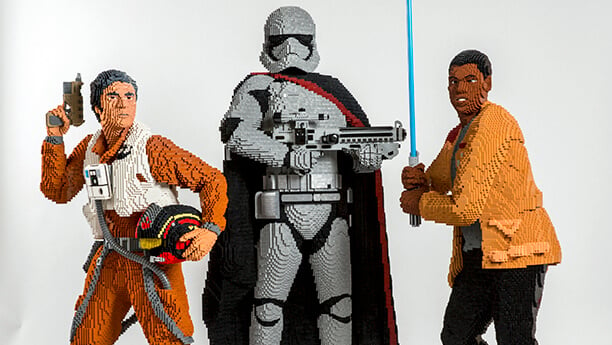 Now I know what you’re thinking: “When I grow up, I want to build life-size LEGO statues of pop culture icons, specifically Star Wars characters!”

Well you’re gonna have to wait a little while pal, because that job’s been filled by…some person somewhere. When Lego built life-size models of Kylo Ren, Rey, and BB-8 for the Star Wars: The Force Awakens premiere, people were blown away in a way that only block statues could do.

Now 675 real human hours later, Entertainment Weekly has released some excellent photos that show Captain Phasma, Finn, and Poe have now been block-ified and are on display at New York Toy Fair 2016.

Inside the Magic was also at Toy Fair for a day this year and captured some video footage of these three – plus the addition of Kylo Ren! And lastly, Finn (John Boyega) stands at 68.9 inches, 112 pounds, and 23,072 bricks. We imagine his derpy cross-eyes took at least twelve tries to get right. Would you put in the time to build this kind of thing, ya know, if you weren’t being paid?