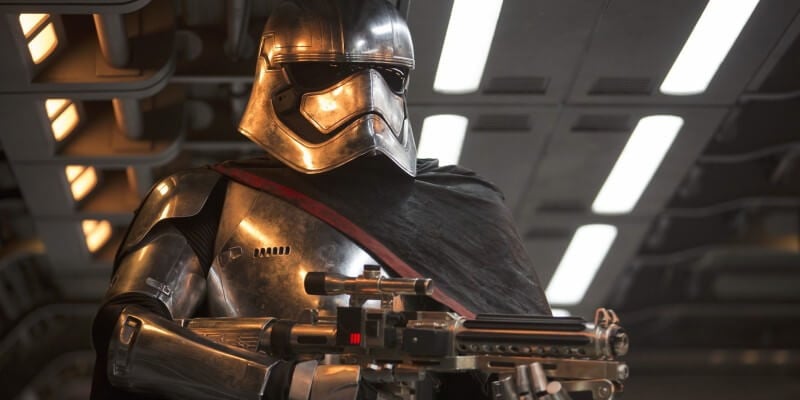 “Star Wars: The Force Awakens” continues to creep toward $2 billion at the worldwide box office, and news about the future of the franchise remains on everyone’s minds. It was already announced that the sequel to “The Force Awakens,” the currently untitled “Star Wars: Episode VIII,” was pushed back from its May 2017 to December 2017. While no reason has been officially cited, it appears likely that characters from “The Force Awakens” will be taking on a larger role than was originally anticipated in the sequel. While Rey and Finn seem like obvious characters, it seems we know another character that may take on an expanded role. While at the Screen Actor Guild Awards on January 30th, actress Gwendoline Christie confirmed to People Magazine that she would return for the next Star Wars film. Christie told People, “I will be in the next Star Wars movie. I think that’s an exclusive, actually.” This move should continue Christie’s run of being in the middle of pop culture phenomenons, fresh off of her appearance in “The Hunger Games: Mockingjay Part 2,” as well as her continued participation as the fan favorite character Brienne of Tarth in “Game of Thrones.” While many fans were extremely excited about Captain Phasma going into “The Force Awakens,” it seems like it was one of the few aspects of the film that was a major letdown for audiences. While Phasma was extremely present in the marketing of the film, as well as merchandising, her lack of use in the film was shocking. It has since come out that Phasma was supposed to be played by a man, more likely than not Academy Award nominee Benedict Cumberbatch. This would suggest that if actors of Cumberbatch’s caliber were being courted for the role, Abrams always had plans to expand the character’s role in future films. With Rian Johnson directing “Star Wars: Episode 8,” there’s little doubt that the characters are going to develop significantly. However, with new characters likely to be added as well, its likely that Christie will have to develop Phasma in fairly limited screentime. Still, Phasma has the ability to potentially become the next Boba Fett for the series.