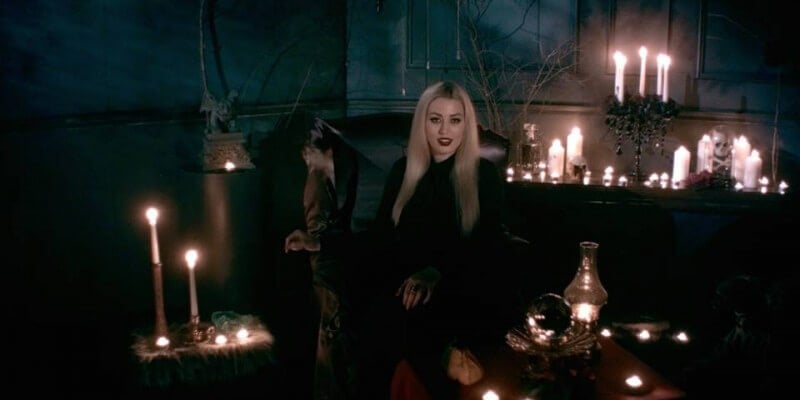 Hits like AMC’s the Walking Dead, American Horror Story, and Bates Motel prove that horror is haute! With Universal rebooting their classic monster movies; an animated Elvira & new Tales from the Crypt returning to television; fear IS the new found franchise of favor.  Horror conventions like Spooky Empire and Monsterpalooza bring guests of gore as fear fans swoon over spooky swag and the chance to party like the dead.

Anthology Horror shows like American Horror Story and the soon to be rebooted Tales from the Crypt are helping to fill the hunger for horror.  Amid this den of delights from the dark side a fresh new series is bursting from the grave, bringing new talent and tales.  Enter horror hostess, aka “Lady of the Haus,” Blair Bathory and her new series on YouTube: Fear Haus. Each Wednesday, new episodes wind their way into the souls of its followers with “A weekly online showcase of the world’s best short horror films.” Who IS Blair Bathory:
She is a murderous storyteller with a little black magic in her soul. Collecting people’s fears is what she does best. Have you always been interested in horror?
Yes, I have always found solace within horror films. I started making “movies” when I was just a kid. I would gather my little friends and direct them in horror scenes, at probably six-years-old. (My Dad and Mom can vouch for this; we have the evidence on video tape.) I was ALWAYS interested in telling horror stories. It just makes me happy.

How has the series been received by fans?
Thus far the horror community has been very welcoming! I love all my “victims” that watch FEAR HAUS.

How did you get involved/conceive the idea for FEAR HAUS?
I started writing and directing my own short horror films four years ago. After screening my own work at film festivals all over the world, I got to see just how many excellent short horror films existed. I was just so surprised that there wasn’t an easily accessible place to see them all. I wanted to create a place that would act as a “home” for all these films. To me, the most logical answer was to have an anthology that showcased all these films weekly. It just seemed like the right thing to do.

What lead you to the candlelight of being a horror hostess?
Frankly, I had a hard time accepting the fact that I was going to have to be the hostess. First and foremost, I am a director and being in front of the camera was never my priority. When I began to do pre-production for the first few episodes, I was having a hard time finding someone to fill the role. A good friend of mine said to me, “Blair, you’re the one that’s going to have to do it. You know the genre, you love it more than anyone.” Now I feel like it’s something I was always meant to do and never realized it. How has the experience changed your un-life?
It has absolutely changed my life for the best! First and foremost, I have gotten to meet and work with so many new and talented people. I’ve gotten major opportunities like hosting a block of horror films in Rome, GA. I also was asked to take over the Spooky Empire Horror Film Festival in Florida. I don’t believe I would’ve been offered those opportunities without the show. I am extremely grateful.

Where can fans find your anthology?
We are everywhere! We’ll be back in March with all new episodes on our Youtube.com/FEARHAUS channel! More FEAR for the new YEAR! Also, you can find us on Twitter, Facebook, and Instagram!

How can an aspiring film maker get his or her horror masterpiece on FEAR HAUS?
First step is to of course make the horror movie you want to make, I’m looking for the auteurs of the genre. Best way for me to see it though is to submit to The Spooky Empire Film Fest through FilmFreeway or send it to thefearhaus@gmail.com

What’s Next for FEAR HAUS?
We have big plans for expanding FEAR HAUS in the near future. I will be at Days of the Dead: Atlanta, Spooky Empire: Retro in Florida, Texas Frightmare, and I’ll be running Spooky Empire Film Fest again!

And what’s next for Blair Bathory?
I will be continuing to grow the roots of FEAR HAUS, making as many appearances this year as possible, and I have written a feature-length screenplay I’d love to put into production. Comments Off on FEAR HAUS: Horror Anthology to return in March with new FEAR for the new year!