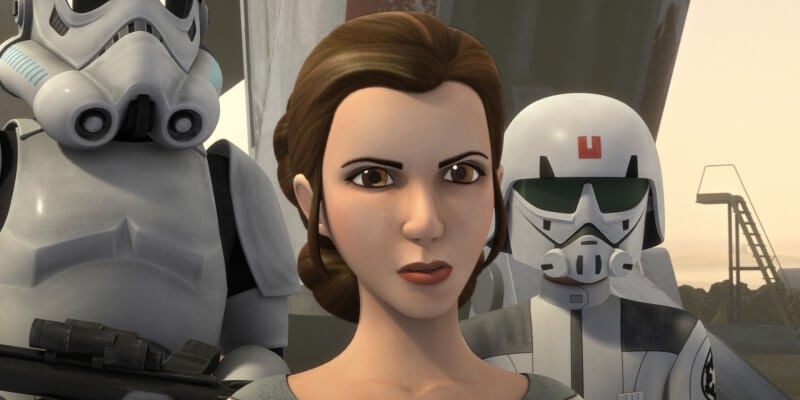 When the second season of “Star Wars Rebels” resumes January 20, a very familiar face will be joining their cause to fight back against the Empire. In the brand new episode “A Princess On Lothal”, Princess Leia Organa makes her debut on the Disney XD show when the Rebels assist her in bringing ships to the Rebel fleet. Along the way, main characters Ezra Bridger and Kana Jarrus go behind the lines to assist Leia, who is still a member of the Galactic Senate at this point in time three years before the events of Episode IV: A New Hope.

“One of the complex challenges of depicting Leia in ‘Star Wars Rebels’ is that we have to remind the audience that she is part of the Empire at this point,” says Executive Producer / Supervising Director Dave Filoni. “She doesn’t believe in the Empire, but she is acting the part, almost as a double agent. The Empire sees her as a privileged princess who runs mercy missions to wayward worlds, but in truth she is much stronger and more dangerous than they imagine.

“There really is no other character quite like her,” says Filoni. “And to quote The Force Awakens’ Lor San Tekka, ‘She’ll always be royalty to me.’”

This will be Leia’s only appearance this season in her visit to Lothal, the planet where the Rebels make their home and has a heavy Imperial presence. Other returning characters that have previously  appeared on Rebels include C-3PO, R2-D2, Lando Calrissian, Yoda, and Ahsoka Tano from the “Star Wars: The Clone Wars” TV series. Princess Leia is voiced by Julie Dolan, who previously portrayed the character in the video game “Star Wars: Uprising” and has worked on Disney’s “Star Tours” attraction. “A Princess in Lothal” airs Wednesday, January 20 at 9:00/8:00c on Disney XD, which is the new timeslot for the popular show.