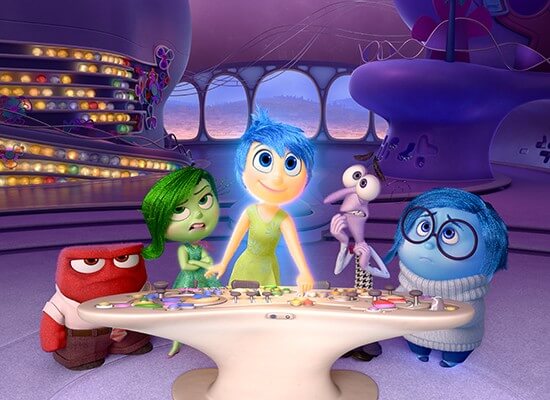 This will be the finale of the Oscar predictions. In this segment, we’ll cover the screenplay awards, directing, and finally the Best Picture race. All the other categories will be summed up at the bottom too, so I’ll be able to give you counts on how many nominations I’m predicting the big features to pull in. Off we go!

Original Screenplay has often been seen as the weaker of the two writing categories, but the last few years have begun to change that perception. This year, a pretty solid top five has established itself but there is some wiggle room here. I believe three are safe, those being “Spotlight,” “The Hateful Eight,” and “Inside Out.” With “Spotlight” running as the Best Picture front-runner, I give it a slight edge over “Inside Out.” However, if Oscar morning wakes up “Spotlight” to fewer than 5 nominations, that might change in a hurry. It is certainly a thrilling film, and the screenplay pops off the screen as both a thriller and love letter to print journalism.

“Inside Out” has been praised by many as the best film for Pixar since “Toy Story 3,” and picking up a nomination here feels like a given at this point. “The Hateful Eight” is written by Tarantino, and the Academy has almost always been on board for where he’s wanted them to go. “Ex Machina” on the other hand, has found its niche as the low budget alternative to “Star Wars” and “The Martian.” It’s very smart in its structure, and with people already watching for Vikander, it would be hard to not notice the impressive script. The only film that should worry here is “Bridge of Spies.” I don’t see anything overtaking it, but “Straight Outta Compton” could find lots of love come Oscar day in smaller pockets. This is one place where it might emerge. After that, “Trainwreck” was fun, but has been seen as a traditional Rom-Com in many respects. “Love & Mercy” has interesting structure, but more so because of the changing actors than the script itself. “Youth” may not be seen as particularly worthy here. “Sicario” should have a shot, but it is dark and some members will not like the places it takes you to. Adam McKay has had quite a year, and this may be the best place to reward him. Most known for his work with Will Ferrell, the directer/writer helped restructure “Ant-Man” into a solid and fun film, and then directed his own adapted script. He likely won’t win in director if he gets in, so this could be his consolation prize. “Steve Jobs” also feels like a shoe-in if for no other reason than it’s Aaron Sorkin and the structure is really cool. Easily one of the most quotable films of the year.

Carol looks like it’s in as well, and Nagy’s adaptation is a major selling point of the film. The same can be said of “Room” which had to adapt itself from an unreliable child narrator into a fully living world. It’s tough to not make this kind of story a melodrama, and Donoghue deserves the credit she’s received. “The Martian” should take it, but there’s trouble brewing here. Drew Goddard’s script gave Damon and the crew a lot to work with, and should find its way to a nomination. Still, a screenplay ahout a screenwriter in “Trumbo” might be too hard to pass up for the writers. “Brooklyn” has also found love, and it’s female-centric narrative should be one that is encouraged, not wasted. “The Revenant” and “Creed” feel like they could get in if there’s enough love, yet they feel unlikely. Like “Inside Out,” Charlie Kaufman may find love for his “Anomalisa” outside of the Best Animated film race. Still, it’s a long shot, and Kaufman’s been rewarded several times in the past.

With three films rushing toward Best Picture nominations, Tom McCarthy, Alejandro González Iñárritu, and George Miller seem poised to receive recognition. Miller’s return to the franchise that gave his career a boost has been an amazing ride, and his actions were clearly the “most” to help his film succeed. Iñárritu just won last year, and the Academy doesn’t like to give back-to-back wins in this category. Still, the Globe win does question whether or not he’s poised to take it. McCarthy has an up and down year, and after the bomb that was “The Cobbler” made its way on instant viewing, he’s surely happy he had “Spotlight” in the pipeline. Give him credit, it’s a “Lead-less” movie, which is extremely hard to pull off. Is the Academy going to go with the veterans, or the new kids on the block? Ridley Scott needs this more for his legacy than Spielberg, who has already claimed a spot on the director’s Mount Rushmore of his generation. Scott was behind some visionary films in the late 1970s until the early 2000s. Yet, it appears lost a bit of his touch of late. “The Martian” is good, but it doesn’t feel like Scott is the reason why. For Spielberg, this would be his 8th nomination, which still somehow feels below what he should have. On the other hand, it would only be his third nomination since 2000. It could help bolster his post-“Saving Private Ryan” legacy, but more than anything, it’d be nice to see another nomination with Hanks as the star.

Adam McKay scored a DGA nom on Tuesday, but it’s hard to be sure if that’s going to translate. Todd Haynes has been around but his films are generally outside of the mainstream. Maybe they reward him for moving back to the center? Abramson and F. Gary Gray are the reasons their films work, and could surprise like Benh Zeitlin did with “Beasts of the Southern Wild.” Finally, Denis Villeneuve is lurking like a wolf for a gap to seize. His work is not far from Miller’s, but again, the film goes to some very dark places. Certainly not for everybody. With everything in mind, there are six films I think are locks for Best Picture. Those films are “Spotlight,” “The Big Short,” “The Revenant,” “The Martian,” “Bridge of Spies,” and “Mad Max: Fury Road.” Each should receive at least 5 Oscars nominations, and each has their own angle on taking the top prize. “Spotlight” still seems like it has the best chance to win it all, but “Mad Max” had such a strong showing in the guilds that it clearly has a solid backing from diverse voters.

The rest of the films in my top 15 are on the bubble. Remember,  it takes 5% of the first place votes for a film to get a nomination for Best Picture. Since the system has been implemented, 9 films have made the cut twice, and last year 8 films hit the mark. I’m predicting that this will be the first year under this system that 10 films get nominated (the system was implemented as an alternative to a consistent year of 10).

The two I have making the cut that others do not are “Inside Out” and “Star Wars.” I think that “Inside Out’s” support will come from the animation branch, and its strong rating are undeniable. However it’s had some big misses. One in particular was missing the Producers Guild of America, which included “Sicario” and “Ex Machina” over the animated film. Both “Up” and “Toy Story 3” were considered a top 10 film in addition to getting the animated nods. Still that’s a small sample size, and “Inside Out” could buck the trend. “Star Wars” is interesting, because it should easily finish with more than 5 nominations, which puts it in the same class with the Best Bets. However, will voters go with “Star Wars” if they’re already going with “Mad Max” and “The Martian?” That might be too many sci-fi genre pictures. While I personally would place the film in the 3rd or 4th best film in the franchise, the film is cruising through the box office and will easily be the most nominated “Star Wars” film since “A New Hope”. With the expanded field, a Best Picture nomination is more likely than many people think.

Due to the similarities between “Carol” and “Brooklyn” I think that only one gets through, and I’m predicting going with the more dramatic story (on its face). The other problem for “Brooklyn” is that is full of up and coming actresses and actors, while “Carol” is full of established award contenders like Cate Blanchett, Rooney Mara, and Kyle Chandler. “Trumbo” seems like it could be a strong contender, but most of the love has fallen to its actors as opposed to its other categories. That probably won’t be enough for the nomination. “Straight Outta Compton” should be a nominee for many reasons. It is a unique biopic, depicting the story of one the greatest rap groups of all time. It was a box office success, and drew rave reviews. At the same time, while it was all around solid, it doesn’t look like it will show up in a lot of other categories. This could be our first ever film to get a Best Picture nomination and not show up in the other categories. “Sicario” and “The Hateful Eight” are both in my top 5 of the year, but I think they’re a hard sell outside a specific audience. “Sicario” feels like the more likely of the two, because it essentially a war movie, but Tarantino is already seen as an all-time great director. That could help the film out. Still, I would be surprised if either showed up. With all the analysis on the table, this would be the breakdown if my picks hit 100% (they won’t). I actually have a three-way tie for the most nominations with 9 between “Mad Max,” “Bridge of Spies,” and “The Revenant.” The second tier also ends in a four-way tie at 6 with “Star Wars: The Force Awakens,” “Carol,” “Spotlight,” and “The Martian.” “Inside Out” clocks in with 4 (as does “The Danish Girl), “Room, “The Hateful Eight, “Steve Jobs” and “The Big Short” all have 3, and “Sicario,” “Creed,” “Ex-Machina,” and “Trumbo” all come in with 2. Disney should also expect solo nominations for “Cinderella,” “The Good Dinosaur,” and “Sanjay’s Super Team.” Universal is also looking to grab nominations for “Straight Outta Compton,” “Furious 7,” “Crimson Peak,” and “Jurassic World.” Overall this would give Disney a total of  22 nominations, with Universal clocking in at 4. Overall, it was a great year for film, and we’ll have a post detailing the nominations that we actually convert on.

Tune in January 13th at 8:30 AM (ET) to see the nominations announced live! It’s a fun time, we promise.