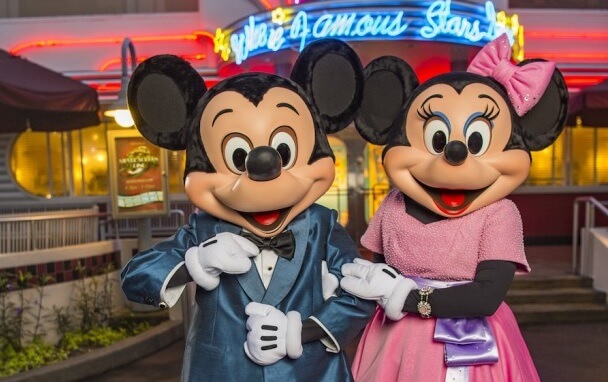 During the holiday season, the Hollywood and Vine restaurant at Disney’s Hollywood Studios hosted the Minnie Holiday Dine event. Now for spring of 2016 a new dine event will take over. Minnie Mouse and her friends celebrate the magic of the movies and glamour of Hollywood with an epic feast at the new Minnie’s Silver Screen Dine at Hollywood & Vine. The all new character dining experience is hosted by Minnie and her pals and begins just in time for Academy Awards season. Dinner guests will walk the red carpet and get ready for their close-up with some of the biggest stars of the silver screen. Mickey, Minnie, Donald, Daisy and Goofy will all be there and dressed in their designer best. Mickey will greet guests and pose with them for photographs in the midst of the glitz and glamour before escorting them into the dinner party, where guests get the chance to meet Minnie, Donald, Daisy and Goofy as they enjoy classic cuisine, themed to old Hollywood. This new party at Walt Disney World Resort is filled with dazzling décor, a sweeping musical score, award-winning food, activities and more.

For the rest of the year this seasonal dine event will take place:

June 6, 2016 – September 11, 2016
Minnie’s Summertime Dine
It’s a sizzling summer celebration as Minnie Mouse and all of her friends head to Hollywood & Vine for a beach-inspired dinner bash celebrating the excitement of summer!

September 12, 2016 – November 6, 2016
Minnie’s Halloween Dine
Head on down to Minnie Mouse’s favorite haunt as she invites all of her friends for a frightfully festive Halloween dinner party at Hollywood & Vine!

November 7, 2016 – January 6, 2017
Minnie’s Holiday Fantasmic! Dine
Celebrate the season with Minnie Mouse as she and all of her friends deck the halls of Hollywood & Vine for a dazzling dinner party chock-full of the cheerful togetherness of the holiday season!