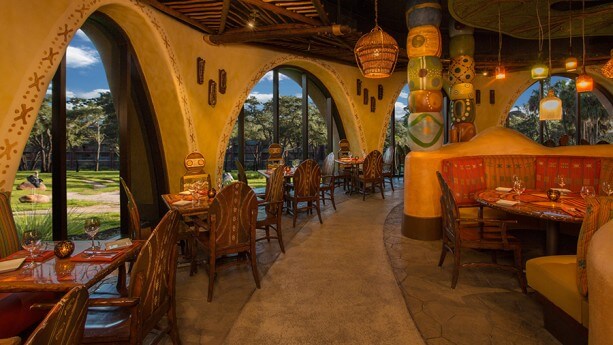 Opening in 2009, Sanaa at Disney’s Animal Kingdom Lodge – Kidani Village, quickly became a cast member favorite, and what most consider a hidden gem. Recently the cuisine went on a new adventure with the Disney chefs by adding items to the menu that continues their passion of melding hints of Indian and African influences inspired by the resort, and the relationship of the two cultures on the ancient Spice Trade Route. Chef Eddie Mendoza has added new dishes to the menu that he calls “African with an Indian touch.”

“We didn’t invent this fusion, it happened with the ancient spice trade,” Chef Eddie explains in an interview with the Disney Parks Blog. “Something magical happened once the Indian spices hit the shores of Africa.”

This restaurant features menu items for those adventurous eaters, or for those who prefer to stick with more traditional fare. From the New York strip steak, or season fish, to the “Boerewors and Slaphakskeentjies,” Sanaa will be a memorable dining experience. Oh and that “Boerewors and Slaphakskeentjies” I mentioned? That’s traditional South African sausages, or boerewors, served with a Cape Malay Onion Salad, also know as the slaphakskeentjies. Also new to the menu are Traditional Sosatie served with butternut squash, bacon, cashews and goat cheese as well as Biryani, a favorite dish that is popular in India.

Have any guests in your party with food allergies or dietary needs?

“Allergy-friendly menus and dietary needs are pretty simple in the Sanaa kitchen,” says Chef Eddie, “as much of the menu is plant based and easy to tweak for special diets.”