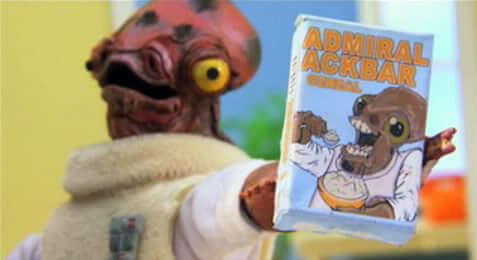 Star Wars – The Force Awakens ushered in the excitement of George Lucas’ fantasy universe to a new Jedi generation.  Bringing the adventure and wonder of the original trilogy back to the screen, Disney soon saw success as the film quickly ascended the throne room to become the highest grossing movie in North America.

The nearly forty year success of the Star Wars franchise is nothing short of legendary.  One clear sign of pop-culture prominence is parody.  When the force first blasted its way into the world in 1977, farce was not far behind. The granddaddy of Star Wars silliness made its entrance in 1978.  Ernie Fosselius saw his Hardware Wars received viral acclaim in the film festival circuit.  According to OpenCulture.com the parody earned an unheard of $1,000,000 (making it profitable like the move it spoofed).

With the hyperspace-hilarity gates opened, creativity crawled out in popular shorts like Troops, Thumb Wars and Chad Vader – all of which can be found on YouTube today (though not a parody, the Star Wars Holiday Special still lurks there as well).  Unlike MTV, music and video still play nice together on the internet – Weird Al, Bucket Head, Richard Cheese and the Piano Guys are few artists that have flirted with the force. Mel Brooks brought the ultimate tribute with Spaceballs – a full feature film superbly spoofing the Star Wars universe.  The success of Spaceballs even spawned Spaceballs the Animated Series (a spoof spoofing pop culture on G4). Fans of Dark Helmet recently rejoiced upon learning Schwartz will awaken in a sequel confirmed by Brooks.

Finally for those looking to master the Force – Playboy offered this option (though, for some reason, its not available in all areas of the galaxy)