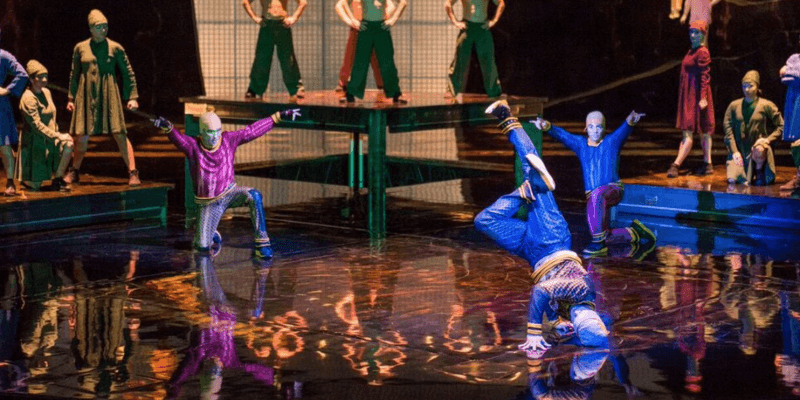 La Nouba by Cirque du Soleil recently introduced two new acts to the show: B-Boy, also known as breakdancing, and Aerial Bamboo according to the Disney Parks Blog. The show now features almost 30 percent of new content and acts due to recent changes.

This is the first time in any Cirque du Soleil show that a breakdancing troupe has been featured. The B-Boy trio is a “demanding form of dance” where performers execute acrobatic tricks, including flips and spins, all set to music. This trio hails from the Bronx, N.Y., the Boston area, and the Ukraine. This is the first time they have ever performed together. Josh Ortiz (“Incredible Josh”), Jean Carlos Lloret (“Bebo”), and Demytro Li (“Flying Buddah”) have all been dancing since childhood. Russian couple Alexander and Ekaterina Abramov are performing for the first time in the United States in this production of La Nouba by Cirque du Soleil. Aerial Bamboo is an art form mastered by few world wide. Originating in China, this involves a pole-shaped apparatus suspended from the ceiling, with attached loops used for tricks and stunts. The Abramov’s show the crowd the immense amount of trust needed to perform this art form, because at multiple times, Ekaterina is held by Alexander only by his arms, feet, and sometimes teeth.

This duo has been performing together for 11 years and are considered the best in the world. They have performed all over the world including Egypt, Korea, Spain, Italy, Thailand, Israel, and Russia and have over 50 years of gymnastics and acrobatic experience together.