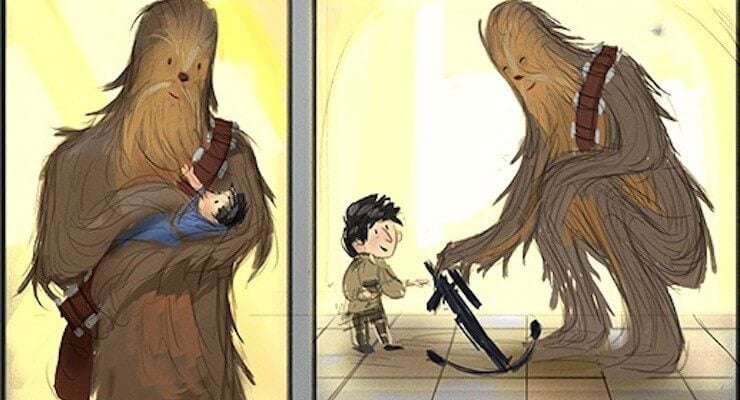 Fan communities often enjoy each others art as a method to tell the stories that cannot always be told in their original medium. “Star Wars” fans in particular have always appreciated the works of fan art, stories, and even mini-movies to provide more details on their favorite characters.

With the release of “Star Wars: The Force Awakens” many fans have begun to ask questions about the events that occurred over the past thirty years of the Star Wars universe between “Return of the Jedi” and the most recent film. One artist for Blizzard Entertainment, Tyson Murphy, decided that there was much to tell between Kylo Ren and Chewbecca.  The comic, posted below, not only contains spoilers for the new film, but also a pretty strong emotional arc. Take a look below, but only if you have not seen the new film.

He wasn’t the only one who posted a comic of that level. Another, which has been making rounds on the internet, tells a different aspect of their sweet story. Overall, both of the comics tell a part of the story that was missing in an emotional, and beautiful way. It’s reasons like this that fan art remains such an integral part of the communities and fandoms they represent.