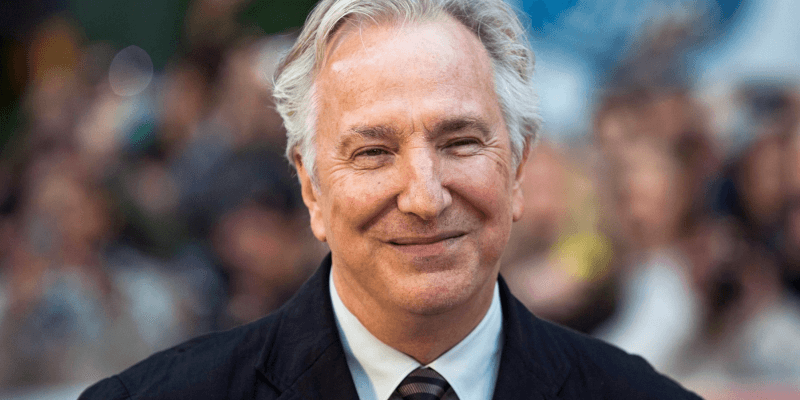 Confirmed this morning, Alan Rickman, one of the most-loved and most admired British actors of the past 30 years, has died in London aged 69. The Rickman family confirmed that he lost a short battle to cancer on Thursday.

Known for his portrayal of the character, Severus Snape, in the Harry Potter films among many acting credits, Rickman has truly left his mark in the world of of film and theatre. J.K. Rowling, as well as some cast members of the films have been reaching out to Rickman’s family and fans via social media to pay tribute to the great actor.

There are no words to express how shocked and devastated I am to hear of Alan Rickman’s death. He was a magnificent actor & a wonderful man.

My thoughts are with Rima and the rest of Alan’s family. We have all lost a great talent. They have lost part of their hearts. — J.K. Rowling (@jk_rowling) January 14, 2016

I was at Leavesden Studios today when I heard the news. As I walked through the canteen I thought of Alan queuing up for his lunch with us mere mortals. I recalled the trailer in which he offered me some of the greatest advice I ever received about this mad profession we shared. Being back in those corridors made me remember a lot of things and I will treasure those memories all my life. He inspired my career more than he ever knew and I’ll miss him.

Shocked & sad to hear Alan Rickman has passed away. One of the nicest actors I’ve ever met.Thoughts and prayers with his family at this time

Terribly sad news about the passing of Alan Rickman. A funny and engaging person who put a shy young actor at ease when I was on HP.

Alan. The energy shifted every time you walked onto set. You were an inspiration to us all. RIP

Alan Rickman is undoubtedly one of the greatest actors I will ever work with. He is also, one of the loyalest and most supportive people I’ve ever met in the film industry. He was so encouraging of me both on set and in the years post-Potter. I’m pretty sure he came and saw everything I ever did on stage both in London and New York. He didn’t have to do that. I know other people who’ve been friends with him for much much longer than I have and they all say “if you call Alan, it doesn’t matter where in the world he is or how busy he is with what he’s doing, he’ll get back to you within a day”.

People create perceptions of actors based on the parts they played so it might surprise some people to learn that contrary to some of the sterner(or downright scary) characters he played, Alan was extremely kind, generous, self-deprecating and funny. And certain things obviously became even funnier when delivered in his unmistakable double-bass.

As an actor he was one of the first of the adults on Potter to treat me like a peer rather than a child. Working with him at such a formative age was incredibly important and I will carry the lessons he taught me for the rest of my life and career. Film sets and theatre stages are all far poorer for the loss of this great actor and man.

I’m very sad to hear about Alan today. I feel so lucky to have worked and spent time with such a special man and actor. I’ll really miss our conversations. RIP Alan. We love you

Rickman was also known for his role as Hans Gruber in Die Hard, as well as Sheriff George of Nottingham in Robin Hood: Prince of Thieves. An experienced stage actor as well, Rickman will be missed by fans of all forms of theater.