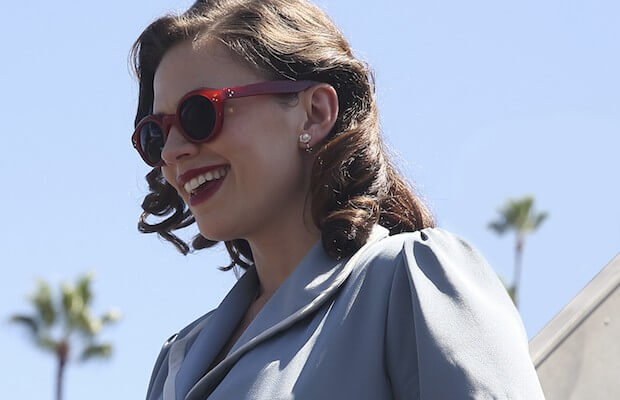 When “Marvel’s Agent Carter” came to ABC last year, expectations for what the show were very high. Peggy Carter, played by Hayley Atwell, remains one of the more complex love interests in the Marvel Universe, and with “Captain America: The First Avenger” aging better than some of the other Avengers, the characters from that film have continued to grow in popularity. However, after the show premiered, it suffered from subpar ratings, likely because of its slow pacing and overuse of misogyny to begin the series. Still a second season was ordered, and a scene shift to L.A. promised changes would be made. With the two hour premiere, it is clear the show is already improving drastically this season. In order to fix the “slow” pace of the first season, the first part of the premiere showcases a raid designed and implemented by Carter. The sting operations finds the SSR capturing Dottie Underwood (Bridget Reagan), one of the main antagonists of the first season, and showcases Carter’s strong strategic background. Shortly after, an unusual murder occurs in Los Angeles, where Detective Sousa (Enver Gjokaj) has started the West Coast office of the SSR. He realizes quickly he will need Agent Carter’s help, and the setup for Season 2 is quickly relayed.

Unlike Season 1, Season 2 quickly gets to the point, and is much better at letting Atwell use her skills to make Carter a complete spy. She was a huge part of why “Captain America: The First Avenger” works as well as it does, and she is starting to fulfill on some of the promise that a show centered on her should have been in the first season. James D’Arcy as Edwin Jarvis is back as well, setting up a solid back and forth that is both sweet and funny. Jarvis’ wife, played by Lotte Verbeek, is introduced as a female Q of sorts. She not only functions as an emotional outlet for Carter, but also helps her craft disguises, as well as make new equipment for her. The accent is a bit out there, and luckily Verbeek plays the humor well enough where it doesn’t become a distraction. The first two episodes of the season do well to establish potential issues for the season to grapple with, most notably the pseudo-Hellfire Club and Zero Matter Energy sources. The show did a solid job of establishing the mysterious groups credentials (apparently the orchestrated the stock market crash of 1929). They also seem to have a hand in a lot of industries, including new energy production in the form of Zero Matter.

New characters also seem like they could add a level of intrigue the show was missing in season one. The episode introduced potential love interest for Carter in Jason Wilkes (Reggie Austin), as well as its supervillain Whitney Frost, a.k.a. Madame Masque. Her motivation feels a little weak at this point, but it is too early to write it off as simple misogyny (again).  Wynn Everett plays the character, and she seems like an actress who is capable of creating a character with depth. It’s too soon to call at this point, and the basic setup does well to establish. While, much improved, there are a couple things that are still issues that bug me with the show. First of all, they really need to tone down the use of camera filters and lighting. There are times where 1950s L.A. may have been the brightest place on Earth. The “smokey” look the series is creating makes sense as a method to establish the fact the show takes place in the past, but it doesn’t work. With shows like “Mad Men” and “Manhatten” telling stories in the same time period, the visual design of these shots make Agent Carter feel like it’s a B-level budget, not that it’s a solid period piece.

Second, and honestly more important, is that it still feels like Peggy Carter is too closely tied to the men in the series. Both the first and second episode of the season end with moments of her questioning what she should do in the light of the actions or presence of the men on the show. While it is interesting to watch, it is hard to not be annoyed that she is still given limited agency in her own show. Why should the men come to define this character, that by all indications, become one the best spies in history. The first season was haunted by the ghost of Captain America, and while this season looks to be better, it still could do more to show she is not defined by the men of the MCU. If anything has proven true, she is far more capable than any of them at this point. One last fun fact to keep in mind for the show, the Zero Matter is a nice nod to “Doctor Strange.” While “Agent Carter” is Marvel’s first show of 2016, it also is a pretty huge first easter egg. There’s no doubt that the Strange film will need as much help as possible to explain its complex workings, especially with the introduction of dark magic. Using the show to help die-hard Marvel fans understand some of the mechanics of this new side of the MCU, both the show and the film become instantly more important. However, it is likely that the information regarding Zero Matter will need repeating, so hopefully it will not tie up the show so much that the show struggles to tell its own story.

Overall the show improves in a lot of places, but still has room for improvement. Hopefully the show will continue its growth as the season continues. One last fun thing about this season, is that the first two episodes barely relied on events of Season 1, so if you’re interested in watching the show,  it’s a great time to jump in.